With our CNIB Guide Dog certification achieved, and my confidence in Lewis’s ability to guide me well established, it was time to contemplate where I could travel with Lewis to put our partnership to the ultimate test. He was already with me twice weekly aboard my fishing boat as my tournament schedule had us competing throughout much of eastern Ontario and west Quebec. What I had in mind was a more distant trip, somewhere well off the grid. And then it came to me, a visit to Ritchie Fall’s Lodge, about three hours north of Sudbury, Ontario.

This northern adventure meant travelling to Sudbury by plane, renting a 4×4 to travel north of the Trans-Canada Highway on logging roads, and then a variety of watercraft and hikes to visit the different lakes that the resort manager, Matthew Owl, wanted me to experience. I placed a call to Matthew to let him know what I had in mind, and he agreed that this might prove to be an invaluable experience.

The largest and most socially and economically valuable contributors to northern Ontario are all those fishing and hunting lodges that can be accessed by road or float plane. The lodges that can be easily accessed via roads, such as the logging roads that led to Richie Falls, are finding it difficult to compete with these more remote fly-in operations. It’s not that the fishing or hunting are any better, it’s more the perception of the guests who come from all over the world to experience Canada’s wilderness. And by far, these are the folks who really want to fish and hunt. The economic value these operations generate in northern Ontario exceeds what is generated by forestry and mining combined.

When Matthew’s First Nations community purchased the 100-year old Richie Falls from its third owner, the goal was to blend indigenous knowledge with the established management practices of the resort, and to offer new indigenous cultural experiences to their guests. The resort also serves as an employer of First Nations people who are interested in a career in the hospitality industry. My goal in re-visiting Richie Falls was to observe how Matthew and his wife Kyla were succeeding in transforming this established operation into a new indigenous cultural enterprise, and to learn more about their community’s observations on climate change. It would make for the perfect opportunity to work with Moby, my previous guide dog, in the north away from city sounds and sidewalks. 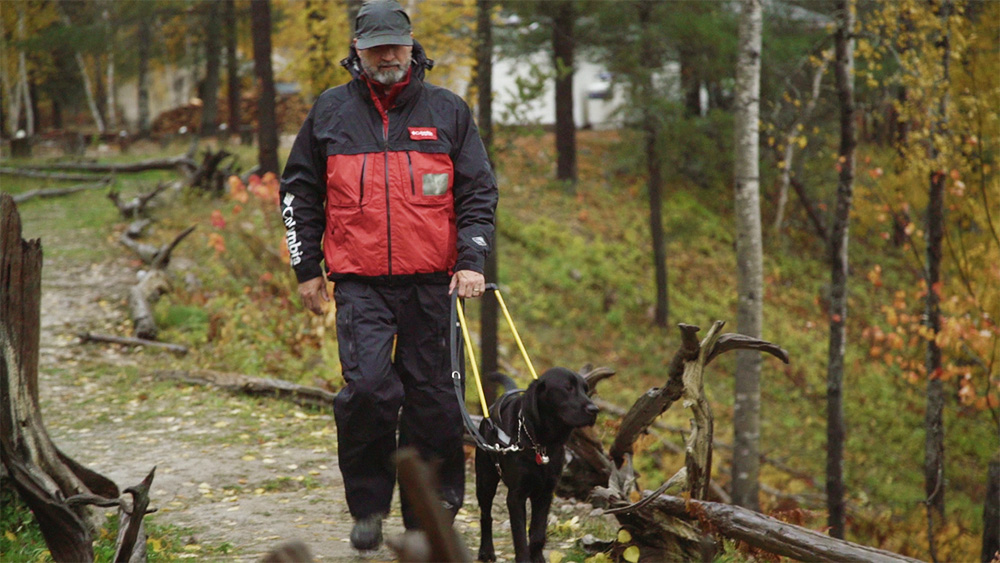 Lawrence and Lewis taking a walk in the forest

It took a day of travel for Lewis and I to reach Richie Falls along with our sound technician and camera crew for the documentary. When we arrived, we were surprised (and a bit concerned) to find that there seemed to be no-one in the camp. We finally came across a father and his two sons who had recently returned from the forest following their fourth day of hunting bears. Matthew is pretty good about putting his guests on the trail of big game, but he told me later that this group of hunters had very little experience. It was no surprise to anyone when the group said they had decided to leave for home the next day without having bagged themselves a bear. No-one seemed too concerned about their empty-handed return. They had convinced themselves that the cold weather that had moved into the area two weeks previously had resulted in the bears holding up. It turned out this was a great group of guys, though. We sat for several hours together in the lodge as we discussed the need for ensuring the conservation of Canada’s natural resources. These hunters were passionate about conservation and they spoke about the many conservation organizations they helped finance through their successful family business.

It was about 9:00 p.m. when one of the staff members arrived back at the camp and got us settled into our cabin and served us a hardy Thanksgiving turkey feast. We learned that Matthew had been in the bush working with a second group of hunters who were looking to fill their “one moose” tag.

They had been hunting for four days without any luck and Matthew had organized a hunting group for the afternoon. It resulted in two moose being harvested, one 900-pound male for the group and a second 600-pound male for Matthew and his family. Matthew didn’t make it back to the camp until 2:00 a.m. that morning.

Over the next couple of days, Matthew and Kyla would lead us on a number of adventures into the forest. It was a break for the two of them now that the hunters were taken care of. It also gave us time to catch up on how things were going. Lewis also experienced many new and different smells and sights that go along with a fishing and hunting camp, the forest trails, and shorelines that stretch for hundreds of kilometers in all directions. Matthew has over 10,000 hectares of forest land to manage. He has adopted the method of utilizing only one quarter of the land for up to two years before switching to a different quarter. It means that each quarter rests for six years prior to being harvested for two years. Intermixed with all this is a First Nation-led forestry operation that clear-cuts 100-hectare segments of forest at a time, with care to leave segments of regenerating and mature forest between each newly harvested segment. This makes for a chequerboard of areas of the forest, but which has several positive impacts. These different areas serve as natural firebreaks that prevent forest fires from sweeping across large segments of mature forest. They also stimulate the growth of wild berries and brush that are crucial to sustaining the growth of deer, bear, and moose, as well as wolves that prey on these same animals. Blending the forestry and the hunting together in this way has proven to be highly successful. Older growth forest provides far less grazing opportunity for animals due to the lack of sun reaching the forest floor. Biologists have now proven, and Matthew’s elders back this up, that selective clear-cutting forestry practices lead to increases in the numbers of foraging animals and their predators. Sharing in the harvesting of prey with wolves and cougars is all part of the circle of life.

Lewis and I learned that in spite of our best efforts to manage and protect our northern wilderness, changes in climate patterns and the march north of more southerly animals is resulting in unpredictability in both the weather and animal behaviour. For example, we hiked into a lake that is unreachable by road, and yet it is now dominated by the more southerly species of bass known as Smallmouth. How Smallmouth got into this lake, as they have in so many northern lakes, is still unclear. These fish are veracious predators, though, and they out-perform their more northerly competitions, such as Lake Trout, Brook Trout, Whitefish, and Walleye. Also impacting on the transformation of Ontario’s northern lakes is the longer growing season and warmer water temperatures that are leading to weed growth in lakes that had only ever known rock and wood introduced by beaver. To help stem the tide of the Smallmouth’s northerly push, conservation policy now allows for Smallmouth to be harvested year-round.

Fishing the fast water below waterfalls is always a thrill. The sound of the water rushing past makes the experience that much more intense. Getting down below the falls requires a bit of a hike, which is something I wanted to do with Lewis alone. No guiding, no cautionary advice on which way to turn, just Lewis and me figuring it out, step by uncertain step. The nice thing when taking on a challenge like this is the fact that dogs have infinite patience. They don’t care how long it takes as long as everyone is happy and working together. We did it, though, on our last afternoon. It was raining off-and-on, the temperature was dropping, but we were warm and dry, and had a cabin to retreat to afterwards to warm up again. And we did it. We made it down the hill and over the Canadian Shield rocks, right up to the edge of the river. This is something I liked to do as a young boy when I could still see well enough to ride a bike and hike a trail. I can’t do either of these things on my own anymore, but with Lewis by my side, I’m doing it again. And it has changed my life.

On our last day and evening, the weather turned cold and snow began to fly. It signalled an end to our CNIB Guide Dog project. It was a year before that the project was finally approved, and it meant we were able to experience the elements for each of the four seasons. The time flew by, even if film projects such as this involve considerable planning and resources. Thousands of emails and dozens of conference calls, a few miss-steps her and there, but lots of life-changing learning along the way. This is what happens when you film in the outdoors with a bunch of dogs. Anything and everything can go wrong. And it does.