In April of 2014 my wife Anne, our two youngest children ages 6 and 8, myself and my guide dog Moby along with our 3lb Yorky, traveled down the east coast of the Gulf of Mexico. Our accommodations were a 34-foot ultra-light travel trailer that we towed with our V6-powered half-ton truck.  The entire trip lasted just over three weeks and covered roughly 7,000 kilometers. Before we could get underway however, I first had to dig and salt the trailer free from the mountain of snow that covered and surrounded our portable shelter.

Our first stop was Sarasota Florida where we jumped directly into a series of aquatic exploration activities. The 10-acre fishing pond with fishing dock located on the grounds of our first campground featured a large sign warning against feeding the Alligators on penalty of $5,000. My son and I scoped out the banks of the pond, and after determining the coast to be clear, hurried on to the fishing dock to give the fishing a try using his 3-foot ice rod. He caught the biggest Sunfish I’ve ever had the pleasure of holding. It was a Red Eared Sunfish that was as big as a dinner plate. I had to hand-bomb it in in the end as his rod just didn’t have the guts to lift it the ten feet to where we stood. He hooked it on a yellow fuzzy-grub. It may have been the size of a dinner plate, but we set her free anyway. Wish I had my camera….

The next day’s field trip to Miakka State Park had us on a 100-acre lake that scientists claim is home to over 1,000 Alligators. We weren’t disappointed. Lots of reptilians of all sizes sunning themselves on shore in groups of up to 15 at a time. We also witnessed a rare day-time viewing of a large male gulping down a good-sized 20-inch fish that he caught in a mid-lake weed bed. The air boat tour of the lake was excellent, and we learned a lot about Alligator nesting, feeding and aggression behaviours – turns out they are poor runners on land because of their soft under-bellies. Interestingly enough, on offer at the park’s restaurant was alligator stew.

Still in Sarasota we took a half-day pontoon boat cruise on to the Gulf to explore the islands and tidal grass flats. The 28-foot pontoon we were on held 20 visitors, the operator, and a biologist from the Mote Marine Laboratory and Aquarium.

First stop was a small island where we explored the plant and island life forms. The second stop was on a tidal flat where each of us was equipped with dip nets on 5-foot poles. The biologist collected a sample of the numerous various life forms we gathered and placed them in a bucket for examination and explanation later back aboard the boat. Critters included Needle Fish and Starfish.

This foot-soaking, hands-on adventure was the real-deal and worth every penny. To catch and hold such a variety of sea life convinced my daughter that her ambition in life is to become a marine biologist.

Next stop was Fort Myers where we took a long walk to collect sea shells on barefoot beach, fed turtles living in the small pond behind our campsite, and spent a day aboard a 100-foot head boat fishing off shore with 80 others. A variety of pan-sized fish were caught, and my wife matched me fish-for-fish.

On several occasions while at the rail fishing aboard the headboat, a shortish elderly gentleman would appear at my side to offer assistance with rebaiting, untangling lines or unhooking fish. I was usually managing fine. I just assumed he was one of the deck hands. It wasn’t until we were disembarking that my wife identified the individual as the captain. While disembarking our diminutive captain noticed my white stick and commented that he hadn’t been aware I couldn’t see, to which I replied that I didn’t know he could drive a boat. The crew had a good laugh and so did the captain as we shook hands warmly and I thanked him for the great day. My 16-inch Black Spot narrowly missed out on winning the big fish pot.

Our next stop was Islamorada — the fishing capital of the world. This key is about half way between Miami and Key West. We had two events scheduled for our stay. The first being a visit to the Theater by the Sea, and the second involved my spending a day on a flats boat with a local guide to explore the back waters. Dinners at several dock-side restaurants, hand-feeding 5-foot Tarpon off the docks and a visit to Earnest Hemmingway’s fishing boat housed inside the local Bass Pro Shop all served to make our short visit at this key even more memorable.

The Theater by the Sea is one of the first ever aquariums to open in the United States and has been around for over 70 years. It includes a large man-made lake formed by flooding a former quarry. The stone taken from this pit was used to create the numerous causeways that now link the various islands together making it possible to drive from Miami to Key West.

My wife and daughter signed up to swim with the dolphins while my son and I stayed on shore under the shade and watched. My son had just turned six, was still learning to swim, and didn’t feel comfortable being used by the dolphins as a human beach ball. Our turn would come later. My wife and daughter on the other hand received kisses, rubbed bellies, splashed, danced and were taken for tows while holding on to dorsal fins. My son and I opted for the dolphin encounter, where we also received kisses, rubbed Dolphin bellies, played fetch, and received gifts of small leaves retrieved for us by the 800 lb Dolphin using its remarkably small mouth.

Stormy, our big male Dolphin had no issue with me feeling his face as I searched his snout with my hands for my gift. There’s no actual nose opening on their snout, (there nasal opening is located on top of their heads), so it’s understandable how Dolphins can kill sharks by ramming their under-bellies with their blunt snouts. It’s like a hard bony club.

My day aboard a 16-foot flats boat with David Denkers for a day of backwater fishing went as well as I hoped, with the exception of missing out on catching a grand slam (Permit, Bone and Tarpon) by one species. To read about this adventure and see the pics, visit my story called…

From Islamorada we set off still further south for Key West. We camped just a bit north of the city on a narrow piece of land that separated the Atlantic Ocean from the Gulf of Mexico. Our campsite was directly on the beach under the Coconut trees, which is a mixed blessing. Sure there’s shade, but there’s also coconuts from acorn size all the way up to full-sized nuts that can do actual damage when they drop out of the trees, and they do, right on to the picnic table where my kids and wife were painting seashells.

A short walk from our campground was an old unused bridge spanning one of the countless channels that connect the Atlantic to the Golf. It made for an excellent place to spend late afternoons fishing. The water would be so clear my wife and kids could see the different fish as they passed under the bridge. One minute the water would be empty of life, and the next instant everyone would be getting bit. The occasional large 4-foot-plus fish passing below would trigger screams of amazement, but unfortunately, not screams from our fishing reel drags.

Key West itself was quite touristy. We did tour Hemingway’s home and take a dip in the ocean off the beach, but probably the highlight was our dinner in a small out door cafe.

Chickens roam free everywhere in Key West, including chicks and roosters alike. My wife was amazed and shocked to witness live chickens mount neighbouring but empty beautifully set tables to perch inside the empty wine glasses. The restaurant staff would replace the wine glasses that were knocked over, but not those that served as perches and remained standing.

Chickens and chicks weaved there way between the tables, and even though the signs said not to feed the birds, there were plenty of patrons who did, which would eventually lead to the offending guests being overwhelmed by pushy chickens. Inevitably, restaurant staff would have to herd the more aggressive birds away from the table where the earlier amused and now slightly shaken dinner guests would quietly but quickly finished their meals.

A small thing I found disturbing in Key West was the amount and variety of sea coral on sale at the various gift shops. With an endless parade of monster cruise ships docking in the harbour, the shops seemed to be moving large amounts of specimens that ranged in price from $20, all the way up to $100 for specimens that easily measured 20-inches in circumference. I thought it was illegal to harvest coral.

From Key West we travelled six hours north back up the U.S. #1 highway, past Miami and Lake Okeechobee, and our final destination, Fort Wilderness at Disney World. By far the nicest campground we ever had the pleasure of visiting. Tons of privacy, trees, amenities, and a 5-day rest from driving for my wife.

We visited all the major theme parks, but by far our favorite were Animal Kingdom, where the kids participated in a park-wide treasure hunt focussed exclusively on identifying and learning about the many wild birds and animals that make this Kingdom their home. Each of the over-thirty locations we searched out on the hunt had a Disney staff member on hand to administer a test on what the kids had learned and to apply the stamps after answering the five questions correctly. The associated theme rides designed more to educate and thrill than scare were highlights, as was the amazing afternoon parade of actors, acrobats, puppeteers and folk-art inspired representations of various birds and animals.

The highlight for me was the “Land” exhibit located within the Epcot theme park. There was an amazing gondola ride along water courses that snaked their way through huge experimental greenhouses where all manner of crops were being grown. An accompanying narrative of the agricultural issues facing the planet provided an unflinching explanation of what was needed if the world was to continue to feed itself sustainably for future generations. Afterwards, the lunch counter had on offer the various organic vegetables and farmed animals grown on site. An amazing set of monstrous aquariums were also included as part of another more Disneyesque ride with biologists standing by to answer questions about the various manatees, sharks and  other sea animals swimming lazily in their huge tanks. Some of the more thrill oriented rides had lines that discouraged us from sampling, but most offered virtually instant access. In all, there were five rides / theatrical offerings that we enjoyed thoroughly in the one exhibit building called “Land”.

Our final and least enjoyable experience with water took place on our way home. The weather was overcast and drizzly, but nothing extreme when we pulled into a Walmart parking lot in North Carolina to over-night. I was therefore shocked and relieved the next morning when I heard on the radio that not one but two tornados touched down in that very state destroying over 200 homes while we slept innocently in our ultra-light weight travel trailer among a cluster of big trucks. With one more big push we arrived safe and sound at our home in Ottawa at midnight that night. When we left there was still over four feet of snow on the ground, and when we returned it was gone.  Still cool, but spring had finally sprung. 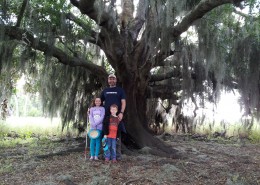 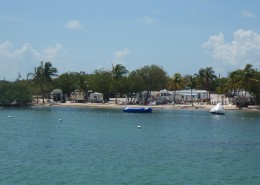 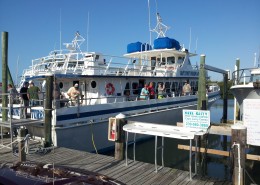 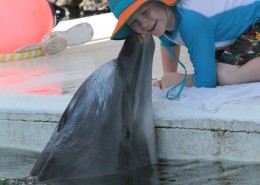 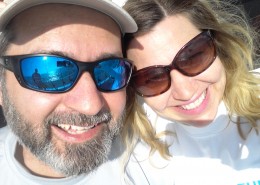 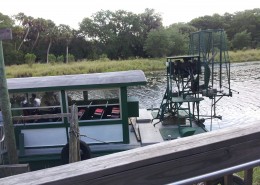 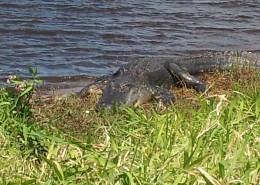 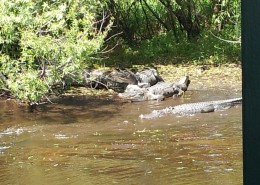 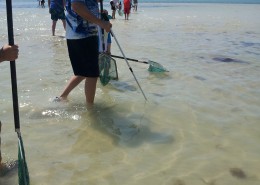