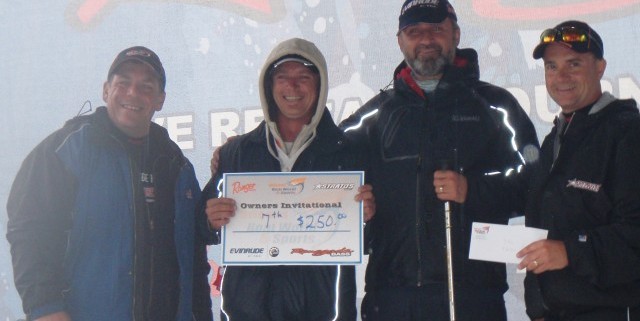 Once again I took part in the Ranger – Stratos Invitational Bass Tournament.  The charity fund raiser is organized each year by Orleans Boat World.  This year saw 52 teams competing on the Ottawa River out of Rockland Ontario.

Weather for the day was gray with light drizzle – perfect for Smallies.  My partner, Myles West, and I blasted off as team #32 aboard my 2012 Ranger 619 Fisherman powered with a 225 hp E-Tec from Evinrude.

We started by working weed lines along the openings of bays and picked up three quick keepers.  However, when we started throwing cranks around a stone retaining wall all heck broke loose.  A 4lb Largie was quickly followed up with numerous 3lb+ Smallies. By 10: we had culled ourselves into a fairly decent bag.

Our second largest fish of the day didn’t seem to be fairing all too well so we decided to release it back into the river.  It was a 3.5lb Smallie, but thankfully, we caught a suitable replacement.

With five hours to go, we switched up baits with the hopes of landing a real kicker.  The Ottawa River is known for some amazingly big Bass – they have to be if they want to avoid being Eaton by the numerous super-sized Musky that make this river their home.  Unfortunately, other than some amazingly large Catfish and Northern Pike, we just weren’t able to bring aboard a kicker to finish off the day.

Our weight of 14.75lbs was enough to earn Miles and I 7th place over-all and a cheque for our efforts.  19lbs took first place.  The weigh-in was orchestrated by Renegade Bass folks using Shimano’s live release system, and the BBQ and prize bags were sponsored by Ranger Boats, Evinrude, First Mate Lures, and last but certainly not least, Orleans Boat World.  Most importantly, a sizeable chunk of cash was raised for charity.