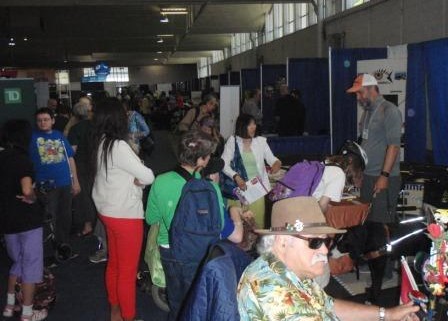 While January offers me plenty of opportunities to ice fish, February is show season and pretty much every weekend has me exhibiting and speaking at outdoor shows. Shows this year included the 4-day Ottawa Boat and Sportsman Show, the 4-day Toronto sportsman Show, and the 2-day Toronto People in Motion show. In total over the ten days over 155,000 people visited the three shows. 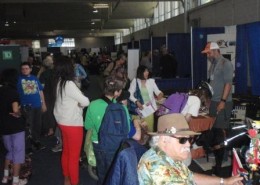 The fish stewardship charity I founded in 2012, “Blue Fish Canada”, has received several considerable grants this year. Ozilles Marina on the Ottawa River stepped up in a big way, and I can’t say thanks enough to Yves for his tremendous support. The Pietrie Island Ice Fishing Association also generously donated the proceeds’ of their ice fishing tournament, and Tides Canada and the Fresh Water Alliance awarded Blue Fish a very generous grant.

Blue fish volunteers were able to assemble and distribute just over 1,000 free shoreline clean-up kits and stewardship guides. More program activities are being planned, including a joint venture with the Ottawa Valley South Bass Masters and their hosting the 2014 Ontario B.A.S.S qualifiers. I’m also participating on the planning committee for the National Fresh Water Rally scheduled for October in Ottawa, and have a media event planned to help launch the event.

Blue Fish Radio continues to gain popularity. I’m continuing to host semi-weekly episodes of the program, which has been picked up by Reno Viola’s WRVO internet radio program. Twenty-two 30-minute episodes have been broadcast to date.

I’ve been profiled on a number of TV networks again including Rogers and CTV twice. The Toronto Star and Ottawa Sun newspapers published good-sized pieces. Lund Boats also included an excellent information piece on my work with the CNIB Lake Joseph Centre for the blind in their spring magazine / catalogue.

Lures and Tours publications has generously stepped up with a commitment to feature my initiatives in their social media and hard-copy publications. T.J. from Ontario Fishing Network also continues to host and distribute related content over the web. Websites now include:

I worked an evening at the Sail Outdoor store in Ottawa on behalf of Muskie Canada. Plano/Frabill also had me helping out throughout May at the launch of the new “pro Fishing Sections” in many of the Canadian tire Stores located in Ontario. I managed to work six stores over five days. I enjoy hanging out in the fishing section of a store under any circumstance, but to be compensated to talk fishing is a real bonus.

My articles published under the Feel the Bite tag line continue to be published in Ontario Fishing Network, Outdoors Unlimited, Yamamoto Inside Line, and other magazines and websites.

My 90-minute documentary is near finished after not quite four years, and should be released in 2014. Making a movie is far more resource intensive then filming video for TV? Sound production involves four stages of production alone.

TV opportunities are growing in number. Several discussions are now underway, but it often seems to be the case that “hurry up and wait” are the only two speeds this industry knows.

I’m being featured as part of a 24-month travelling exhibition throughout Canada called “It’s An Honour!” for my having received the Meritorious Service Medal from Canada’s Governor General. The interactive exhibit is visiting towns throughout Canada that have populations of below 50,000 with the exception of a 4-day visit in Ottawa over Canada Day.

Orleans Boat World, Ranger boats and Evinrude Outboards have come to my assistance once again and have up-dated my ride. Sticking with the Ranger 620 Fisherman powered with an E-TEC 250 HO. Ran this same combination last year and I love it!

Four Wheel Campers Canada has assisted by topping my new Ford 150 pickup with one of their pop-up truck campers. With the roof down it only sticks up 10 inches above the truck’s roof, and when expanded I’m easily able to walk around inside. It has two large comfortable beds and a fully equipped kitchen. Weighing only 1,100 pounds, I leave it on the truck full time and have experienced only very minor fuel usage increases – thank you Eco-Boost.

Action Car and Truck Accessories has generously stepped up with some add-ons for the Ford. My priorities for the truck right now include a backup camera and obstacle detection sensors on all four corners of the vehicle. Don’t worry, I have no plans on driving. I’ll wait until I get one of those new Google self driving cars – do you think one could pull my boat?

New Shimano Rods and reels continue to astonish me with their continuous evolution, as with their Power Pro fishing line and Jackle Baits.

Scotty, Plano, Frabill, Minn Kota, Lowrance, Trokar, Salus Marine, HumanWare, Berts Custom Tackle, all lend their support to keeping my various endeavours fluid. Eukanuba pet foods has been a key sponsor for the past six years, but news of PnG’s recent sale of their pet food division to Mars has raised concern over this relationship’s future.

Stay tuned for reports of up-coming activities including a 24-hour fish-a-thon as part of the national fresh water rally planned for Ottawa this coming October.