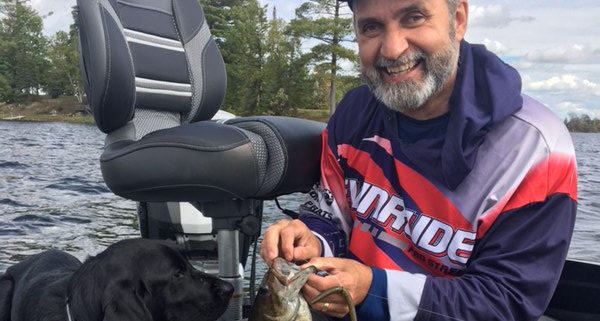 Hard to believe that just over a year has passed since we finished filming “Makings of a Guide Dog”. My new guide dog is working out great, and so are the rest of the graduates now faithfully serving their blind charges throughout Canada, including Iqaluit.

The past year has most certainly been unusual at best, and incredibly difficult for many. It’s the reason we paused the release of the video series and documentary “Makings of a Guide Dog”. Our reason for releasing it now is to make sure we can accurately tell the stories of the seven young guide dog trainees before life events make the telling problematic, or at best inaccurate. We also felt that just maybe the videos and documentary would give people more reason for hope that we can overcome adversity. At the very least, it’s a positive story you don’t often hear.

As in the making of any film, there’s a   back-story that most people never get to hear. It most often involves people, and filming involves lots of people and plenty of things happening . But this time the back-story, while quite personal, I think underscores the message the video series and documentary are trying to convey. For this reason it’s important to me that I share what happened in 2019 while engaged in the production of the series and film.

First off, I want to acknowledge December 3, United Nations “International Day of Persons with Disabilities”, a program that started in the early 1990’s when a friend of mine in Sweden was nominated by Canada to become the first UN representative on disability issues. With so much in the news this year about BIPOC issues, I cannot help thinking about the rights of people with disabilities too. I’m proud that AMI TV chose “Makings of a Guide Dog” as their feature to celebrate this amazing Day! You can watch the full-length documentary today, December 3, at 7 p.m. Eastern on AMI tv. If you miss AMI’s presentations, as of today you can also watch the full-length documentary and the ten short videos on the CNIB’s YouTube channel at: https://www.youtube.com/playlist?list=PLpAOW00xNyyYCvM_Hj4WjO9zHW9en-b2W 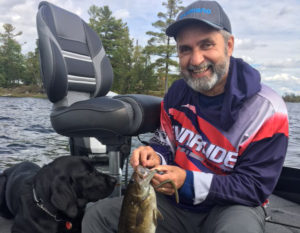 If it weren’t for positive strides to improve accessibility and opportunities for people with disabilities beginning in the 1980’s, I likely would not be writing this post today. I was registered blind in 1971 at age eight, and my prospects upon graduating high school according to many were few. They ranged from an offer from the government to receive a life-long disability pension, to an invitation to join the Blind Piano Tuner’s Union. To a young man of 18, my prospects hit me like a cold shower.

I owe my parents for having raised me the way they did, which is a big part of this back-story. Both my parents let me grow up without a lot of restrictions, but with plenty of expectations. My father especially not only made sure I had plenty of opportunities to expand my horizons, but believed in me, even when the rest of society viewed people like me who live life without sight as pretty much helpless. Dad’s support, love and friendship is a big part of the back-story of Makings of a Guide Dog.

So this is the back-story behind Makings of a Guide Dog. I pitched the idea to Griffon Parks Films and the CNIB in late 2018. It was about a month after my guide dog Moby died suddenly from cancer. Instead of returning to the school where I was trained with Moby, I wanted to try something different.

Instead of the usual routine of leaving home for 2-3 weeks to be matched and trained with a new guide dog, and then coming home to start the process myself of training the dog to guide me in the outdoors, I wanted to train the trainers instead. To pass on my 30+ years of knowledge so that others like me who enjoy the outdoors can benefit from a guide dog comfortable with guiding off the sidewalk. Turns out the CNIB thought the idea had merit, and with the support of Griffon Park Films, the project was green lit in mid December 2018. We began filming in late January 2019.

Despite the cold and the young age of the seven guide dog trainees, we were able to film half the episodes before winter was over. It was around then that my 90-year old father fell in his nursing home and broke his hip.

With Dad having advanced Alzheimer’s, the hospital wasn’t even sure if surgery was a good idea. Being one of three family members with power of attorney for my father’s wellbeing, the decision to pursue surgery rested with us. 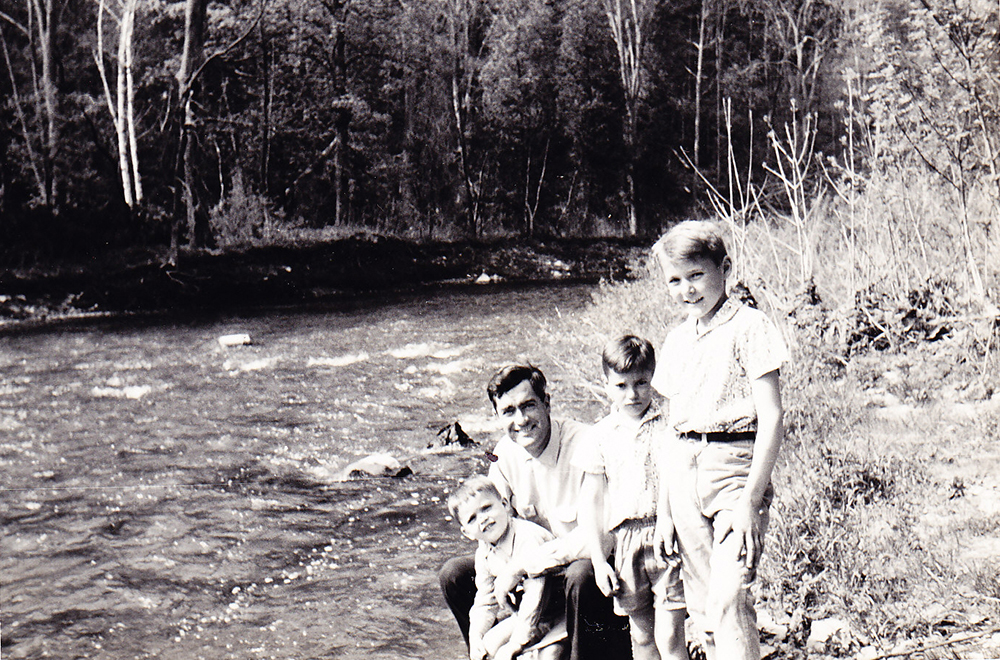 At that point, my father had already lost much of his mental capacities. But, he was still tough as nails. He bounced back from the surgery and was up on his feet again the next day. Unfortunately, we didn’t know it then, but it was the beginning of the end for Dad. 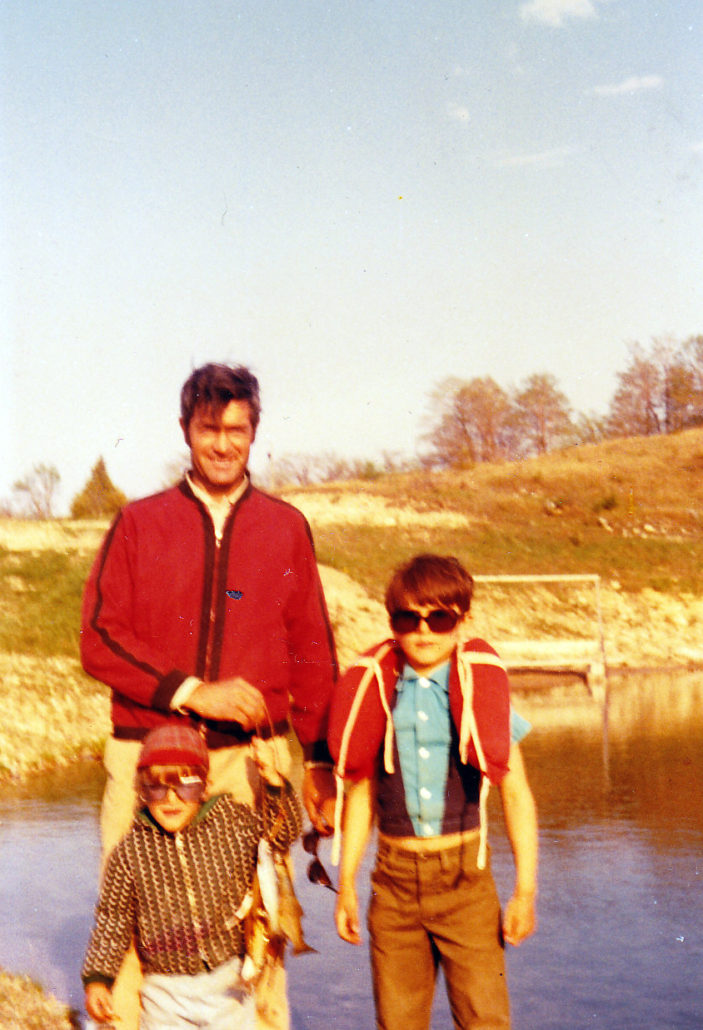 Lawrence in sunglasses with his Dad and Nico holding stringer

He never did quite regain his ability to walk, as he forgot how. Unfortunately, he also forgot that he couldn’t walk. Contracting pneumonia in the hospital further contributing to Dad’s decline. Over the next eight months he was readmitted three more times TO treat infections. Eventually, HE lost his ability to eat and then drink.

While my father’s health was slowly unravelling, I still had to plan, script and film a bunch more segments of Makings of a Guide Dog. You can’t stop the dogs from growing up or put their training on hold – the show had to go on. What started off for me as a great idea, slowly transformed into a surreal distraction from my responsibilities for my father’s care, treatment, and eventually, the decision to bring an end to his life.

The last segment we filmed took place in Northern Ontario the week prior to Dad’s passing. I wanted to call off that shoot, but with airline tickets already purchased for the film crew, lodging secured, guides booked, and with the on-set of winter coming on strong up north, it was our last window of opportunity. Further complicating matters was my family’s uncertainty over when or even if Dad’s life supports should be withdrawn.

Dad died on Oct 22 a week after I returned from the film shoot in northern Ontario. I stayed with him in Toronto, but even after we had the life support systems removed, the tough old guy defied everyone and kept on going. His doctor’s thought it would only be a matter of a day, maybe two, and were totally unnerved by his fortitude. 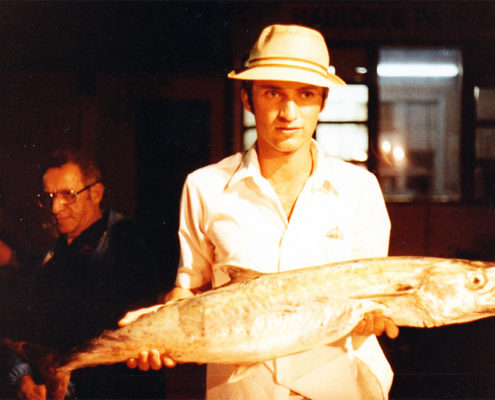 I know I may have spoiled any chance of the documentary being a pleasant distraction for those reading this post – linking it to my father’s death – but the making of the films series and my father’s passing are so closely linked for me. Bouncing between production of the filming and being they’re for Dad throughout much of 2019 consumed a big chunk of my life.

More than that though, my father truly represented such a huge emotional space in my life. He taught me to fish, hike and camp, and so much more. He never let my disability prevent me from trying just about anything. He even taught me to drive.

I know its part of life that our love ones eventually die, but it’s astonishing how the actual death process and the feeling of loss that follows are so completely different. I’m still trying to sort out my feelings about all of this.

In the meantime, I have a new great guide dog at my side. This is guide dog number 6, having received my first guide dog in August 1986. However, I can say that losing a guide dog in no way prepared me for the loss of my father. It’s not just that I always end up with a new guide dog either.

I recognize that we often have more than one “father” type figure throughout our lives. But there’s no one who can replace my Dad, he’s been with me my entire life. I owe him and love him so much. 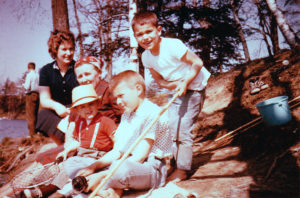 They say a man’s best friend is his dog. I’ve had great dogs, but over time, my Dad went from being my father, to becoming my best friend. We could talk to each other about anything, and we knew each other so well. So when you watch the documentary, remember, if it weren’t for my Dad, it’s quite likely that none of this would have been possible.

It most certainly wouldn’t have been possible without the generous support of Alex Sliman from Griffon Park Films or John Rafferty from the CNIB. For some reason, both these visionaries believe that I, a totally blind individual, can create impactful and entertaining films.

But to be completely honest, I know I can’t take all the credit. I know this because I never forget that I need to walk backwards when moving forward to make sure I never forget where I’m coming from. I know too, that if Dad could have watched Makings of a Guide Dog, he would have been proud. So thanks Dad.

Being open in this way isn’t something I’m use to. I’m more of a practical kind of person. But, in the interest of sharing, I’ve written a bunch of blogs about how I do the outdoor things I love to do. I also wrote about the great guide dogs that came before this one. My hope is to be able to pass on the information I’ve gathered so that others living without sight might also be inspired to live life in the outdoors. You can read the blogs at: https://lawrencegunther.com/makings-of-a-guide-dog/

Making the videos and documentary also got people thinking about podcasting. I’ve been producing “The Blue Fish Radio Show” podcast since 2012, and have recently launched a new podcast series called “Outdoors with Lawrence Gunther” full of interesting places to go in the outdoors and tips on how I adventure in the outdoors. The podcasts are available over most all podcast rebroadcasting platforms.