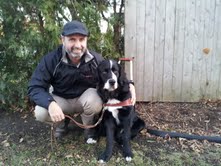 4- Earning my SCUBA certification and diving on the St. Lawrence River

2- Being included in the national exhibit, “From Far and Wide – Honouring Great Canadians”

This year my show seminars focused on how fish use their different senses. Six outdoor shows featured my exhibits for a total of 14 days (131 hours). The exhibits included various watercraft and the latest in both blind technologies and fishing innovations. A big hit were the over 750 autographed cards I brailed with the names of kids who visited my booth.

I competed in a total of 19 competitive events in 2012 earning 7 top five finishes including one first and two big fish. I finished 15 out of 30 in the Ottawa Valley South Bass Masters series, and 7th out of 38 in the Ottawa Regional Walleye League. My competitive fishing season ended with a 7th place finish out of 52 teams competing in the Ranger/Stratos Invitational Bass Tournament, not bad considering we were up against many of the region’s best Bass fishers.

Water levels throughout Ontario were the lowest in years resulting in fish moving into deeper waters. This worked to my advantage as I prefer vertical touch-based techniques over sight fishing (LOL). It also meant I caught all manner of fish species in unorthodox ways such as  Lake Trout and Musky dropshotting on my favorite Trokar TK150 hooks, catfish and drumb on ultralight Shimano spinning gear, and quite a number of amazingly large panfish bottom bouncing Lindy spinner rigs. Suspending jerkbaits like Rapala’s Clack’n Minnow seem to out shine spinnerbaits this year and accounted for many of my largest Bass and Pike. 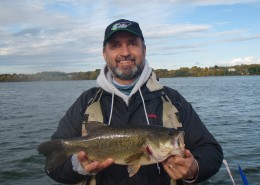 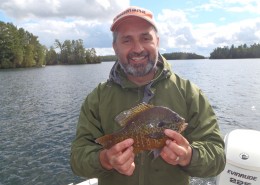 I gave the key note address again at the 24th “Blind Anglers International Tournament”, and organized a 5-day technology training program for the blind at the CNIB Lake Joseph Centre. I’ve been actively sea-trialing aboard my 12-foot Porta-Bote various versions of a new talking compass called MaxPAC, and even managed to orchestrate what could very likely be the world’s first treasure hunt for the blind using six of HumanWare’s talking Trekker Breeze GPS systems.

Plans for next year include organizing in partnership with area Lions a blind kayak fishing tournament for elite blind fishers. Jenda Paddle sports has agreed to provide HobieCat kayaks with Mirage drives, a leg-powered propoltion system coupled with a hand- controlled rudder. As well, my continued volunteer commitment as a director with the CNIB Lake Joseph Centre, a 48-room facility for the blind located on the shores of beautiful Lake Joseph in central Ontario, will hopefully soon result in the Centre acquiring a dedicated fishing boat.

It’s through innovations such as Shimano’s graphite fishing rods, no-stretch Power Pro fishing line, and ultra-dense Ultra Tungsten fishing weights that I’m able to feel as much as I do – making it possible for me to write and speak with authority on the use of touch when fishing. I think I set a record this year on the number of articles published under my Feel the Bite! tag-line. In addition to contributing twice-weekly to Lindy’s on-line audio fishing report service, I’m also writing for Gary Yamamoto’s Inside Magazine, ODU (Outdoor Unlimited) Magazine, National Pro Staff.com, and Ontario Fishing Network. There are also the numerous “how to” and adventure reports I post on my blogs “Blind Fishing Boat” and “Feel the Bite!”

With support from Ranger Boats, BRP Evinrude and the good folks at Orleans Boat World, I spent the year competing aboard a 619 Ranger Fisherman powered with a 225hp Evinrude E-TEC. All my guest pilots / fishing partners couldn’t say enough great things about this rig. This year’s weather was also one of the windiest on record; providing ample opportunity for the Ranger’s rough water handling and tracking characteristics to shine. The 619 Fisherman’s performance haul saved our butts during the B1 Berkley Bass Tournament on the St. Lawrence River when 30 boats out of 150 competitors broke down due to severe weather. 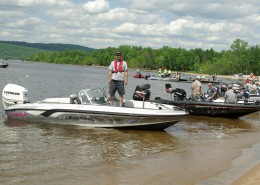 As always, the E-TEC performed flawlessly and its quiet operation made communications with my guest pilots painless. The Minn Kota Terrova’s I-Pilot continues to awe my guests with it’s quiet power and “spot-lock” anchorless GPS-based holding feature. The new Scotty high performance electric down riggers are amazingly fast meaning more line time in the water. Configuring the two Lowrance HD sounders to display water depth readings from both the transom and below the Terrova at the bow made it possible to accurately track the ledges and drop-offs that we had little trouble finding thanks to Navionic’s highly detailed maps.

To better understand how fish live I put in over 60 hours of training with the good folks at Freedom at Depth to certify in SCUBA. Covered head to foot in 7mm of black neopreme and relatively dry throughout thanks to the new “Aqua Lock” water-tight seals at neck, wrists and ankles built into the new Henderson wetsuits, the only part of me actually touching water directly are my lips. 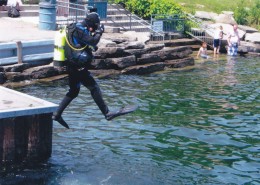 Nothing is more freaky than suspending 90-feet down and having no idea whether I’m rising or still sinking – never mind knowing which way is up. My only means of communicating with my dive partner are through a series of hand-to-hand gestures developed by Freedom at Depths Director and primary trainer, Hubert Chretien.

Feeling my way along the bottoms of lakes and rivers is giving me a new perspective of how fish associate to cover. My next goal is to acquire two-way radio SCUBA masks to compensate for the intense sensory depervation associated with diving blind.

Ice fishing conditions in eastern Ontario were excellent. I focused most of my energies on Walleye, pike and pan fish with good results. A Rapala gas auger, a frabill flip-over shelter and a Lowrance sounder with the audio bite alarm made all the difference. 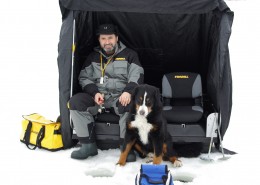 With support from Jenda Paddle Sports I was fortunate to be recruited to HobieCat’s Fishing Team. I’ve always been a paddler going all the way back to 1977 when, at the age of 13, a group of Venturers (one above Scouts) and myself paddled two 25-foot warrior canoes from Port Credit on Lake Ontario, down the St. Lawrence River, along the eastern seaboard, and over to Prince Edward Island, a trip that covered over 1,200 miles (2,100 km). 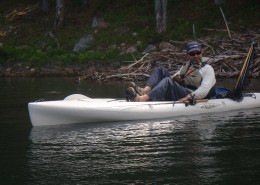 I really wanted to try the Mirage drive offered by HobieCat, and I’m pleased to say it lives up to all the hype and more. Not only does the peddle drive system allow me to fish more effectively by freeing up my hands, but in combination with the hand controlled rudder, I’m able to effect far greater control over my course headings. In fact, it works so well I’ll be organizing, with support from local Lions clubs and Jenda, a blind kayak fishing tournament on the Ottawa River this coming spring for elite blind anglers using HobieCat kayaks outfitted with Mirage Drives, and Trekker Breeze talking GPS systems.

News Talk 1010, Renegade Bass, 580 CFRA, and Angelo Viola’s show are some of the radio programs I interviewed on this year. NBC Sports Outdoors began in January to air a TV episode of “the Best and Worst of Tred Barta” that I featured in alongside Tred fishing for Sails in Guatemala. AMI TV (Accessible Media Inc.) also began airing nationally the episode of “Accessibility in Action” that featured me fishing in my Blind Fishing Boat.

Being included in Canada’s Governor General’s new exhibit, “From Far and Wide – Honouring Great Canadians”, was quite the surprise. The exhibit is located directly across from Canada’s Parliament buildings, and features 32 Canadians with photos and descriptions of why we received our various medals of honour. 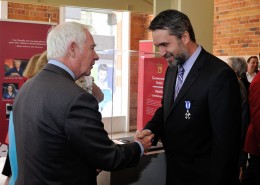 I launched the “Blue Fish Canada” charity in 2012 to protect Canada’s fishing heritage. Our mission is to conserve native marine ecosystems and to promote sustainable fishing practices. It took a year to secure the necessary incorporation and tax certifications, but as of November, Blue Fish Canada is now a federally incorporated non-profit and  registered charity. All proceeds raised from my documentary go to Blue fish Canada.

At the time this report was written, my producer, Mr. Alex Sliman, CEO of Cinilande, and my director, Mr. Emanuel Hoss-Desmarais, were busy organizing the next steps associated with the production of the documentary. It’s been 2.5 years since this amazing trip commenced, but I’m told that isn’t unusual in the world of media. There’s now “sound at the end of the tunnel”, and it would seem a completely new and relatively unknown to me phase of this project is about to commence. Film festivals, theatres, TV and radio appearances, or at the very least a really cool U-Tube video! The waiting hasn’t been easy, but if nothing else, fishing has taught me to be patient.

I will always be pushing the envelope to make fishing more accessible to the blind, and I enjoy the pressure and challenge of fishing competitively; however, the need to preserve Canada’s marine ecosystems and promote sustainable fishing are issues I want to focus on more. Ensuring fishing is an activity that everyone can enjoy for years to come can only be guaranteed if native fish stocks are able to flourish. It’s why I pursued and earned a Masters degree in environmental studies. It’s why I pushed to have the documentary made, and it’s the reason for the creation of Blue fish Canada. Stay tuned

A super big thanks to all those who have volunteered their time to participate in blind fishing adventures, to Salus Marine for providing the PDF’s that kept everyone including Maestro safe , and to my sponsors, friends and, of course, my family. I know that without your support all of what I’ve documented in this report and more would not have been possible. My hope is that, on balance, I’m able to give back far more. And of course a big thank you to my departed buddy Maestro. 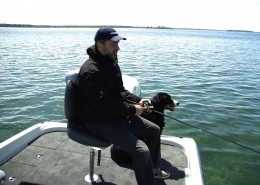 If you know someone who’s wrestling with vision loss, a number which is expected to double from 14 million Americans and Canadians in the next 20 years, offer them a seat in your boat. After all, nine fish out of ten are felt on the line way before they are ever seen. Just stay away from bobbers – no one has invented one that beeps yet. Shoot  me an email if you have questions, (lawrence@lawrencegunther.com), or visit my website www.LawrenceGunther.com for tons of how-to tips for both sighted and blind fishers alike.