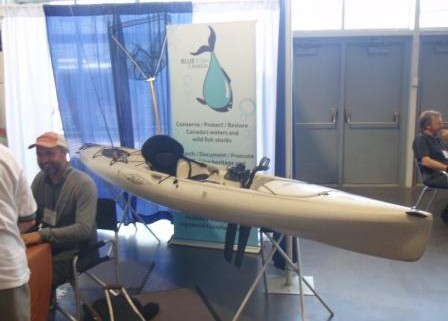 Without doubt, HobieCat’s Mirage drive system for their kayaks has made a huge difference in my fishing and overall navigational ability on the water. Because I depend on my non-visual senses for all things in life, having my hands free to feel what’s taking place both above and below the water is crucial.

The Mirage system allows me to keep one hand on my fishing rod at all times to feel the bite, and the other on the rudder control. My sense of touch allows me to detect even the faintest bites, and my talking technologies and listening skills keep me on course. The fact that the Mirage drive makes virtually no noise also allows me to hear even the slightest sounds around me. It all adds up to be Zen-like perfection on the water.

The 2013 year was supposed to start with a blind kayak fishing adventure. Jenda Paddle Sports generously provided the use of 10 fully equipped HobieCat kayaks with Mirage drives, and HumanWare provided the talking GPS systems. I had waterproof tactile maps made for the ten blind competitors, and we had four shadow boats ready to assist with the measuring, photographing and release of the Northern Pike on the water. The only thing that didn’t cooperate was the weather. 70 km/h winds and whitecaps that lasted all day meant way too many fish stories were told while we hunkered down in the cabins.

Jenda Paddle Sport’s 2-day kayak fishing derby on the Rideau River was a lot of fun. The weather more than cooperated making for a very enjoyable couple days. No doubt, sharing the river with powerboats and cruisers keeps my senses honed, and in close proximity to my fishing partner. A carefully placed small bell on his kayak let me know where he was at all times, or at least until the bell fell overboard.

Catching and releasing a number of decent sized Bass and Walleye certainly added zest to my kayak fishing tournament experience, but sadly, none of my fish earned me top spot. The excellent hospitality provided by Jason Kirby and his wife more than made up for my finishing out of the money.

A humorous tale worth repeating involved a TV shoot I was featuring in for CTV’s news at 6:  for their “amazing People” segment. I was selected for the feature because of my water stewardship initiatives, and I thought what better way to demonstrate sustainable fishing than to showcase my fishing aboard my HobieCat Revolution kayak.

After the on-shore interview component was wrapped up, we moved on to the water. The host and videographer aboard my buddy’s boat, and me aboard my Hobie. We weren’t out on the lake five minutes before the heavy cloud cover let loose with a torrent of rain. Water being a problem for several of my talking navigation aids, I quickly stored the devices below deck and fell back to my human senses to navigate by. However, the rain was falling so hard that the sound made it almost impossible for me to hear. Never mind, I thought, I’ll just keep moving along and casting my lure. Well, I guess my homing instinct was working pretty well because not ten minutes later I t-boned my buddies boat. He told me after that he warned the videographer that a collision was immanent, but the grip insisted they not move as he was relishing the footage he was recording of me face-on. Of course, no one wanted to call out a warning and have their voice spoil the shot.

No damage was done to either boat or yak, and we all had a good laugh. Secretly, I was just glad I found them as I had no idea which way led back to the launch. The segment has been in rotation on CTV’s website and over their networks for over six months, and culminated with a gala dinner and award ceremony on February 22, 2014.

As far as organizing another blind kayak fishing tournament in 2014, I think not. I’ve found a better way to teach fellow blind people to fish by partnering with the CNIB’s Lake Joseph Centre. Starting last summer, we now offer daily fishing adventures out of their central Ontario facility located in the Muskoka’s. I’ll be up there myself again this spring to train-the-trainers, and again in the summer to head up a week of fishing instruction for deaf/ blind adults.

With water temperatures now finally having risen above 60 f. I’ve dusted off the Hobie and prepared my kit. A welcome new addition to my electronics this year is a “Talking Tackle Depth Whisperer” made in the U.S.

With its pleasant female voice and control settings, I think the device will go far towards improving my fish capture rate.

Backwater Adventures in the Florida Keys
Scroll to top