As many of you, my attachment to fishing began with adventures with my father and three brothers as we captured and then consumed all we caught. Even after I was declared legally blind, I still pursued my passion for fishing, and by my early 20’s, I was fishing commercially for Atlantic Cod aboard wooden dories along the coast of Cape Breton Island. It was an idyllic, if not lucrative, way to spend my summers.

My summer employment hand-lining for Cod lasted for about as long as it took me to fill my quite unnaturally large university student’s head with books, lectures and research. Not all nine of those school years were spent sitting at tiny student desks though. Whenever possible I ventured out to conduct field research including a stint in Alberta climbing mountains, residing in the North West Territories among Inuit and Dena natives, and a year in northern Sweden to lecture and conduct research for my master’s thesis. 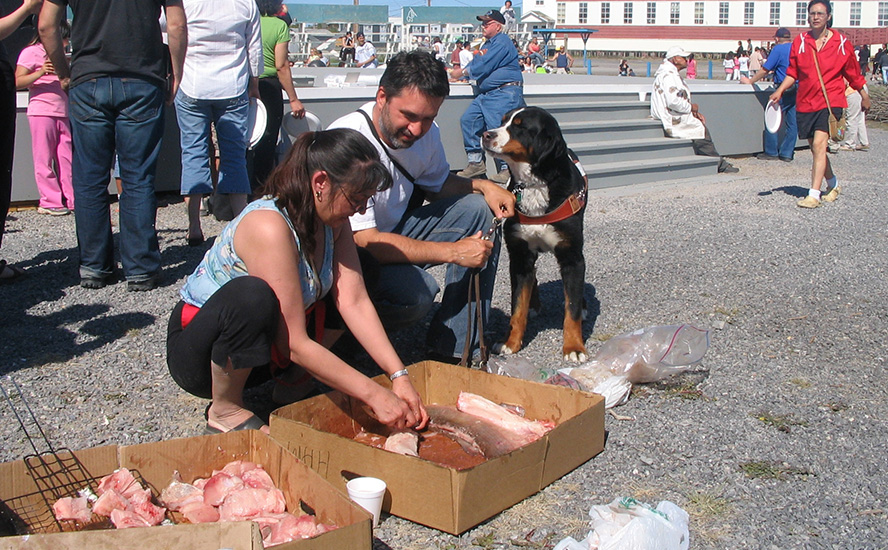 Upon graduating, I became increasingly involved in competitive fishing. I now have well over 100 competitions under my PFD, a half dozen or so wins and a bunch of top-ten finishes. I still fish the odd competitive event, including 14 bass, walleye, musky, salmon and multi-species tournaments scheduled for the 2016 season, but more and more I’m returning to my roots as a devoted recreational angler.

When my remaining vision blinked out in my 40’s, I cobbled together an assortment of talking and audible electronics and pieced together a small electric boat. It restored my ability to fish independently, and garnered me international recognition as the inventor of the world’s first fishing boat for the blind. Not a self-driving boat, but pretty darn close. 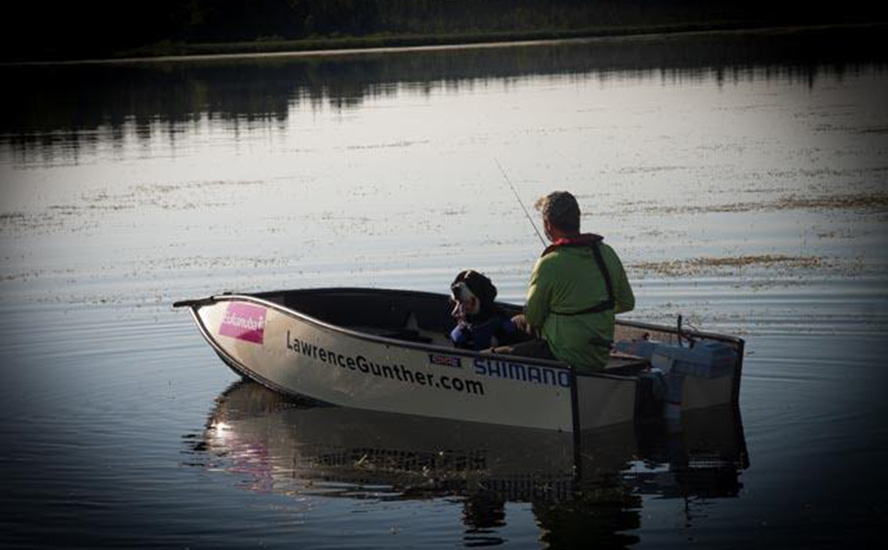 Lawrence in the Blind Fishing Boat

Whether fishing for food, money or fun, vision loss has never been a huge impediment. In fact, I now apply my same visualization skills both above and below the water. The ability to focus without being visually distracted and my reliance on a sense of touch has also led to my becoming quite good at figuring out what’s taking place down below, as well as catching the odd fish. Subsequent SCUBA certification simply confirmed what I had been feeling through my infinitely telescopic sensor – my fishing rod and line.

Apparently I’m in the majority of Canadians who grew up fishing. Nineteen million others claim to have fished and may very likely fish again. Even though it’s the glamour, heart break and instant fame of tournament and commercial fishing that now dominates much of what we read and watch, remarkably, approximately 95% of those who fish do so recreationally. Many anglers still keep fish for the table, but most fish — over half — are now released alive.

Recreational anglers make up the silent majority. We are the people who avoid environmentalists for fear of being judged, and are often overlooked by the tackle and marine industries because, hey, everyone likes to back a winner. That’s all fine, and many prefer it this way, but it doesn’t answer the question, where can we get good information about fishing sustainably?

People seem fed-up hearing about climate change, global warming, acidification of oceans, islands of plastic, etc. It would seem we already know as much as we want to about how our built world and actions are conflicting with nature. What people are asking is what do we need to do differently or better?

Thankfully, eating locally produced food has come into vogue. What could be more natural than catching and consuming locally grown, organic, free-range, wild fish? A sort of return to our earliest hunter-gatherer roots. I’m not talking about sticks and stones survival, but learning from the past and incorporating the best science has to offer.

Blue Fish Canada was founded to provide valid and reliable information, instructive anecdotes, the wisdom of many, and simple tips needed to sort out false claims from the truth about what’s really going on underwater. A mix of the best of the old with the latest and greatest. Perspectives that give people the skills to fish, catch fish, release fish and selectively harvest fish with the confidence that they are doing it in ways that will stand the test of time.

The name Blue Fish Canada comes from the idea that fish consist of about 90% water. This means good water quality is fundamental to the survival of fish, just as clean air is important to us terrestrial animals.

Lastly, I believe strongly in science-based decision making, and that citizen science is crucial to conducting good science. It’s us anglers who are out there observing, analyzing, and solving the puzzle each day on where the fish are, what they are doing, and what’s happening in their world.

With the support of some friends who believe in the above, in 2012 we started the process of incorporating Blue Fish Canada with Industry Canada, and registering the non-profit with the Customs and Revenue Agency. It wasn’t easy as the federal government at the time was of the opinion that Canada had more than enough “environmental” charities, and had set in motion a process to investigate and unregister many – never mind allow new ones to be created. However, persistence paid off, and after numerous forms and letters from the government demanding more proof that we weren’t just another anti-energy pressure group, our application was approved. The next five years was spent developing projects, pilot testing their effectiveness, and building up the programs that showed the most promise of bringing value to Canadians. Every cent raised has gone into programs. I’m now happy to report that Blue Fish Canada is a national leader in the area of fish health and conservation, and promoting sustainable recreational fishing.

Please visit the Blue Fish Canada website and share your comments, insights and direct observations. Who knows, it may just make it on to one of my episodes of Blue Fish Radio, a podcast about the future of fish and fishing.

Walleye Opener and the Law
Scroll to top