Dogs love holding things in their mouths. They love to catch and carry things, always with their mouth. It’s for this reason that it’s important to make sure that CNIB guide dog trainees aren’t interested in mouth-damaging devices such as fishing lures. Nothing brings a day’s fishing to an end faster than a dog with a hook in its paw or lip. Some training can help make sure this never happens to your dog. Of course, using barbless hooks will make removing and half-eaten hooks easy should an accident occur.

For the open water fishing activity, aboard my Ranger Fisherman 21-foot fishing boat were three CNIB guide dog trainees; Marion, Dunstan, and Lewis. That’s a lot of dogs, and when they are puppies it’s a potential crowd. But there was lot’s of space, so that wasn’t a problem. We also had Karen and Andrew onboard, along with my son, Theo, and my fishing buddy, Jason. The day was perfect with moderate temperatures and wind speeds.

The first thing I do with a new dog is to remove the hooks from a lure, tie it on to my fishing line, and then dangle it in front of the dog to see how they react. I drop the lure on to the deck, reel it back up, pretend to cast a few times, and turn my back on the dog, all to see if I can tempt the dog to bite the hookless lure. While all this is going on, I’m constantly reminding the dog that the lure is not for them, and they need to “leave it”‒ one of the CNIB guide dog basic commands.

None of the three dogs showed any interest in “retrieving” the hookless lure. This says a lot about the way they were raised. Guide dog trainees are not to be taught to fetch balls. No blind person wants their guide dog to suddenly take them across a road to retrieve a ball that a child has failed to catch.

Now that basic lure-ignoring training was out of the way, it was time to do some fishing. This can also be quite interesting. It doesn’t take long for a dog to learn that a fishing rod and lure can mean long wet guests suddenly coming aboard the boat, but not before some splashing and a whole lot of excitement.

I wanted to introduce the dogs to a fish. I wanted the dogs to know that this slippery wet thing was not dinner or a toy, that fish are not meant to be licked or held in the mouth, that their slime was not to be licked away. I figured I had about 15-20 seconds to show a fish to the dogs before it had to go back in the water to be released healthy. And it didn’t take long. 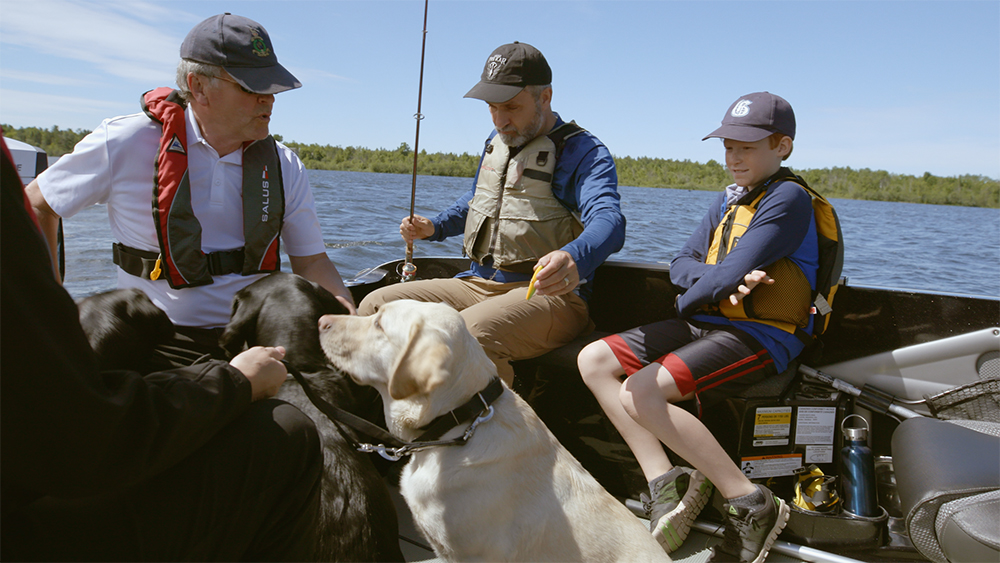 Lawrence prepares his fishing rod making sure Marion, Dunstan, and Lewis do not go after the lure

To be honest, the first few fish that dogs have the pleasure of meeting are pretty much non-entities. After all, they have no idea what a fish is, or that the act of fishing is in any way associated with a fish in the net. It takes experience for a dog to learn that casting out a lure and reeling it back to the boat can result in fish being captured and netted. Once they understand the nature of the sport, they can become quite involved.

I don’t want my guide dogs to become hunters. It’s easy enough to do if you harvest fish, but to make sure the dog doesn’t associate fishing with food, keep the dog away from the preparation of the fish at mealtime. Nothing stirs up a dog’s dormant “killer” instinct than the smell and taste of blood.

Once you open up this part of a dog’s true nature, it can’t be put back. Regardless, they still love fishing. It doesn’t take long for a dog to start watching where you cast to see if a fish will bite.

That day, I managed to catch a 50cm-long Northern Pike. Theo was there, ready with the net, and the barbless hook was quickly removed without the fish ever leaving the water as it was cradled in the net. Once the fishing rods had been safely set aside, Theo lifted the net with the fish into the boat and I carefully lifted the fish out of the net after first wetting my hands to ensure I would not remove the fish’s protective slime-coating with dry hands. All three dogs were sitting quietly wondering what all the fuss was about, and what exactly it was that I had in my hands.

Northern Pike have quite a few razer sharp teeth. They are a true alpha predator, similar to sharks in the ocean. Although fish don’t bite people, you can accidently get your hand cut if you let it get too close to the fish’s mouth. Fish aren’t like some animals that will intentionally try to bite their perceived attackers. From the time the fish came out of the water I had about 15-20 seconds to safely show the pike to the three dogs. Each dog took a turn sniffing the fish, but no actual licking or biting by the dogs took place, and none of the three seemed eager to have the fish for dinner. I returned the pike to the net and lowered it gently back into the water, where it swam away no worse for wear.

Marion, Dunstan, and Lewis smelling a pike caught by Lawrence as Theo looks on

Now in the past, I’ve had guide dogs that took quite a liking to fish. Not as pets or fellow creatures to play with, but more in terms of a healthy snack alternative. Like I said, it doesn’t take much to wake up any dog’s dormant hunter instincts. I’ve had dogs try to steal fish that I was intending to bring home for dinner. I’ve also had dogs fall out of the boat as they attempted to reach out and grasp fish that were in the process of being netted.

In the end, I’m always pleased when my guide dog has learned to fish, when they sit patiently with me waiting for that bite on the line that may not come, no matter how hard you try. To hold still as we crawl up to a river bank or a pond as not to spook the fish, and then suddenly come alert when they see a fish following my lure as I reel it towards shore or the boat. To perk up when they hear the click of the drag on my fishing reel when a large fish pulls line back off the spool. To bark and yip with pleasure when I’m pitted against a large fish that takes every bit of my strength to reel in. It’s almost like we become a team, which is why dogs and humans first joined forces to harvest wild game for food many thousands of years ago. It’s just one more aspect of our shared bond. One more thing that we accomplish together as we continue to build our mutual trust, reliance, and friendship.

Without doubt, each of the three guide dog trainees would make for an excellent fishing buddy. Each one loved being on the boat, and each one displayed a healthy level of curiosity for first-time co-anglers. Like everything good in life though, their path to becoming truly aware of their environment takes time and patience before they will know all that is expected of them as a fully mature fishing buddy.