Loading a camper on to the back of a pickup and having the ability to then tow a boat to ones favorite lake opens up an entire new realm of possibilities. Now, instead of contemplating a trip to a distant lake for a day of fishing, knowing full-well there’s going to be two good long drives involved, it’s now possible to stay for that evening bite and catch the early morning bite the next day – sweet!

Guys seem to grasp the opportunities truck campers represent instinctually. Women understand the premise, but would seem to view truck campers as a barrier between their planned household improvements and the man in their life they’ve associated with many of the heavier tasks on the list. However, this doesn’t explain my six-year old son’s fascination with my new Hawk Four Wheel Truck Camper now occupying the 6-foot 6-inch box of our new Ford 150.

Researching the ideal truck camper took some time. Four Wheel Campers isn’t the only manufacturer of pop-up slide-in truck campers, but they certainly produce the lightest ones on the market. Their use of aluminum gives my Hawk model a weight of 1,100 lbs. On the truck the top of the camper is only a mere 10-inches above the roof of my Ford, resulting in only very minor additional wind resistance.

My goal was to avoid having to purchase a ¾ ton pickup or heavier. Gas engines in the heavier rated pickups on the market today offer less than ideal fuel economy, and their diesel counterparts are far over-rated for the job. I don’t need to pull 20,000 lbs, nor do I need to carry 7,000 lbs of weight.

Ford offers two options on their ½ ton line of pickups that clinched the deal for me. First, a heavy payload option that boosted the capacity of an F150 to 2,330 lbs, and two, a heavy duty tow package that gives me 11,300 lbs of towing capability. All this in a half-ton pickup that has as its power-plant the now famous Ford Eco-Boost 6-cylinder engine.

The numbers break down as 1,100 lbs for the camper, 400 lbs for the weight of the tongue of my boat trailer, 204 lbs of fuel, 400 lbs of passengers (2 guys), another 80 lbs of dog, leaving me 146 lbs surplus payload capacity. Fishing gear is in the boat, which weighs about 4,500 lbs including trailer, motor and batteries. Add another 500 lbs of gas and gear in the boat, and the total weight of the trailer still leaves me 6,300 lbs of room to accommodate all the weight being carried in the truck. All said, I still have around 4,000 lbs of left-over towing / hauling capacity. The Ford handles it all beautifully!

Setting up the Hawk camper takes under a minute, Release six clips around the outside, step into the camper and push out the rear and front walls – done.

A double full-length bed over the cab can be extended to queen size, while the comfortable couch down below tumbles into a second double bed in fewer than five seconds, and it’s capable of sleeping people up to 6’5”.

Across from the couch is a fully equipped galley. A 3 cubic-foot fridge / freezer, gas furnace, 2-burner cook stove, stainless steel sink with a 20 gallon fresh water supply, and all manner of storage. The roof came with an electric exhaust fan on the inside, and a set of roof racks on the top capable of easily holding   three kayaks.

Another nice touch was the Arctic Pack that gave an extra interior liner to boost the internal warmth and dampen sound. Ample windows that fully open and a screen door ensure plenty of light and fresh air accesses the interior, while the windows in the rear door and front of the camper provide the driver with a view behind the truck.

Cargo hauling needs are addressed in several basic ways. The Super crew configuration of the truck means with the rear seats flipped up, there’s tons of space for gear and dog. Even with the seats down my dog has more than enough space to stretch out on the floor. I’ve never experienced a pickup with such a large rear seating area before. The floor in the camper can also accommodate plenty of gear and can be fully accessed even with the roof in the lowered position. Finally, The cab-over design means that my fishing rods longer than 6’6” in length have a safe and secure home in the camper by simply resting the butts of the rods behind the couch’s back rest, and their tips on the upper bunk. Rods of up to 10 feet can easily be accommodated.

Altogether this truck / camper package still represents a sizable chunk of space. Manually extending over-sized camper mirrors from Ford on the front doors provide the driver with excellent views behind the truck, and the camper itself only sticks out past the sides of the truck by no more than two inches. It extends past the rear of the truck’s box about the same, which allows the rear step-up bumper of the truck to be used as a step to enter and exit the camper. The hawk came with a separate set of fold-able steps, but these only become necessary when accommodating children.

Designers of the Hawk also allowed for storage of a portable toilet. I admit, that my knowledge of these systems was fairly rudimentary up until recently, giving me many misconceptions of the potential mess and stink portable toilets represent. However, after exploring the many different options for sale at my near-by Sail outdoor store, I began to feel a lot better about meeting the call of nature.

The unit I purchased for around $100 includes a 4.5 gallon water tank in the top half that can be pumped into the bowl of the toilet prior to usage. A very comfortable seat at a more than satisfactory height accommodates even my 6’3” frame. Once one has completed their absolution’s, a simple tug on the release handle sends all bowl contents into the second tank below where it remains sealed off from the rest of the toilet, and more importantly, the general environment. To empty the holding tank one need only separate the top portion from the bottom by disengaging two clasps, and then carry the lower sealed unit to any nearby toilet. Attach the included dump spout to the drain hole after removing the cover, (the spout is cleverly stored in a recessed area in the bottom), open the air valve, and dump. Modern flush toilets will flush automatically as the level in the bowl rises so one need not watch closely the emptying process, but can judge by feel alone when the tank is empty. A swish inside the tank with some fresh water afterwards isn’t a bad idea.

While the hawk offers everything one needs to stay high and dry and out of the bugs, bringing along some camp chairs and a kitchen tent isn’t a bad idea when contemplating longer than quick over-night stays. In my case however, it’s more important to be able to break camp and get on with launching the boat in as short a time as possible. It means more time in the morning to take advantage of that early morning bite on the water, instead of spending valuable time rolling up tents and storing gear. The roof of my Hawk can be lowered and stowed in less than a minute, and one need not even store the bedding.

So far I’ve had about a half-dozen people back my boat down boat launches, and no one seems to mind the camper. I ask, but they all recognize that once you’re behind the wheel you can’t really see the camper, so it doesn’t factor into the reversing process. The hawk’s light weight also means it poses no potential threat to the Ford to become mired in the soft bottom of un-paved launches. Four wheel drive helps keep everything well in hand too.

Fishing and now camping alongside my favorite lakes and rivers has made it possible for me to develop an even stronger personal bond with nature. Listening to the sounds of birds, frogs and other wildlife while safely tucked away inside my Hawk is a great way to relax, and means I’m in a far better frame of mind when I start off each day in the boat compared to my usual feelings of fatigue and anxiousness to get started fishing when I arrive at the launch after a long drive in the morning. It really has made a big difference in my mental preparedness on tournament days. 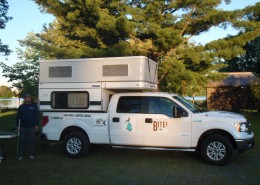 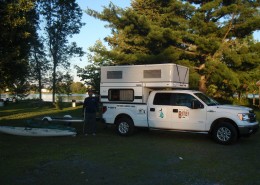 On Ice with Your 4-Legged Friend
Scroll to top