I’ve spent a lot of hours and days in canoes. This began way back in 1977, when 18 of us Venturers decided to canoe from Toronto to Prince Edward Island aboard two 25-foot warrior canoes built for speed. The trip took just over 40 days and had us paddling for at least half the time in saltwater where we experienced driving rain, severe cold, and seriously high waves. Not a trip I recommend! And certainly not one that would be appreciated by your dog.

Canoes are great ways to get around, but why canoe alone?  Having a great dog along for the ride makes for a perfect partner, even if they can’t paddle, as in work with your paddle.

Taking young CNIB Guide Dog trainees out for a canoe ride meant scaling back the adventure a bit. The last thing Andrew Hanlon, CNIB’s Guide Dog Program director, and I wanted was a miss-hap that could turn off a dog from ever wanting to get into a canoe again.

For this outdoor adventure activity, I asked Max Finkelstein, a noted canoe adventurist and whitewater paddler, to join me in the canoe in the stern. Max has paddled thousands of kilometers with his own dogs aboard his canoe and knows what to look for. We wanted to assess just how comfortable each dog was in the canoe, and what might be done to make canoeing a part of CNIB’s Guide Dog training program.

Our guest guide dog trainees for this experiment were Sherman and Lewis. The location was the Rideau River Canoe Club on the shore of Mooney’s Bay, a segment of the Rideau River located within Ottawa city limits. I know this Bay well. I’ve spent hundreds of hours training and competing aboard dragon boats as a former member of the Dragon Eyes team.

We took each guide dog out separately. The dogs were equipped with Skippy flotation devices specifically made for dogs of all sizes by Sailus Marine. I’ve been using this doggy PFD for over ten years as it makes it very handy when my dog falls off the dock or out of the boat. Yes, it’s true. Dogs do fall into the water. I didn’t know this until Max enlightened me.

Dogs prefer to stand in canoes, and it’s actually more stable for everyone. A dog standing can shift their weight to adjust for movement of the canoe. They also figure out pretty quickly that their own movement will result in the canoe itself moving, or at least the smart ones do. The added advantage is that the dog can look around, which can help to reduce their stress level and besides, it’s just way more fun.

Our first four-legged guest aboard Max’s typical 16-foot zero keel prospector canoe was Sherman. I sat at the bow and invited Sherman to come aboard. He stepped in as if he had been doing it all his life. I lengthened Sherman’s leash a bit so I could sit on the one end and keep in physical contact with the dog that was positioned directly behind me. Sitting on the leash of my guide dog is something I learned a long time back as it alerts me to the dog moving away whenever I’m not paying attention.

Sherman was a true voyager. Or perhaps voyageur! He seemed quite comfortable. He did have the tendency of turning from one side to the other quite frequently, and once he leaned over the gunnel to slurp up some Rideau River H2O. He’s a good size dog, so any shifting of his weight was certainly felt through my seat in the canoe. I will say this though, where it counted (at the dock) he boarded and disembarked wonderfully. No sudden leaps or panicky scrambling, just a smooth entry and exit. 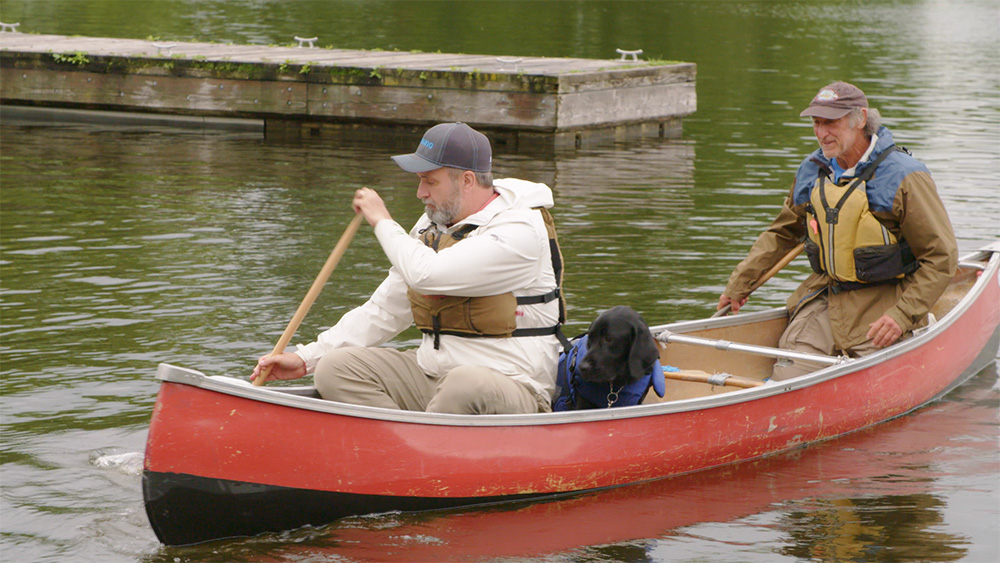 Lewis was next. He too boarded the canoe like an old deck hand. As with Sherman, I tucked the end of his leash under my butt, and then Max and I back-paddled away from the dock. We set off for our push down the river. At one point I asked Max what Lewis was doing because I couldn’t feel anything through the seat of the canoe other than the rhythm of our paddles stroking the water in unison. Max said he was quite impressed with the way Lewis had settled in. He did try as soon as he boarded to drink from the lake, but when the canoe dipped to the side from his shifting, he never tried a second time.

We decided to stop along the beach and stretch our many legs. Warning! Mooney’s Bay beaches play host to a lot of Canada Geese, and there’s one thing geese and dogs share, and that’s droppings. A single goose can excrete up to 1.5 kilos per day, which can make for some pretty messed up beaches. More importantly, though, this makes for a lot of potential trouble for a dog who just may be tempted to partake in a bit of sampling. Never a good idea especially when blue-green algae is present. A dog even drinking water with blue-green algae can cause death, depending on the strain of algae. Always check before you let your dog on to a beach or into the water.

Mooney’s Bay is right in the heart of Ottawa and every summer the Dragon Boat Festival takes place here with upwards of 175 teams competing over a 500-meter course. I competed myself for six years with a team made up largely of paddlers with vision loss, The Dragon Eyes. We got so good we actually purchased our own dragon boat and we consistently placed in the top ten at competitive events, and we even won a few. All this to say, there’s plenty of activity taking place on and around Mooney’s Bay, so if the dogs were going to be affected by distractions, it would have happened that day. But they weren’t, and both dogs performed admirably.

Paddling or canoeing is a great way to connect with nature. It’s quiet, loaded with sensory feedback, great exercise, doesn’t require sight when sitting in the bow, and is a great way to travel. Even though I was first registered blind at age eight, I still had enough sight to stern a canoe for many years after that. Distinguishing where water meets land doesn’t require a lot of sight, so don’t be afraid to take your turn in the stern if you can make out land with what sight you have left. This can even work in rivers. I’ve sterned more than a few canoes down rivers with a good sighted paddler in the bow keeping an eye out for rocks.

I now spend more time in a kayak then I do in a canoe. I kayak solo, but there’s room behind my seat for one more, and that’s my dog. My favourite kayak is made by Hobie and uses a foot-pedal drive system instead of paddling. There’s a rudder that I control with a small lever located next to my seat. With a talking compass, I’m capable of keeping on course just fine, and with my hands free from paddling, I’m able to hold a fishing rod at the same time that I’m moving. It’s a great way to get into those lakes that are otherwise off-limits to powered watercraft.