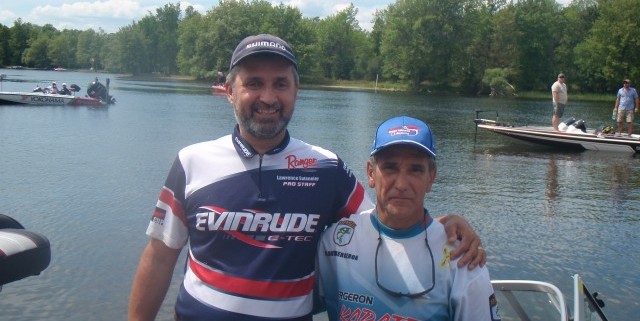 Each year eastern Ontario’s premier tournament Bass fishing organization, Renegade, hosts a pro-am event pairing renegade pros with potential newcomers to tournament Bass fishing.  This year’s event took place once again on Mississippi Lake just outside Carlton Place Ontario, and involved 27 teams.  I was fortunate to be partnered with Claude Bergeron, proprietor of “Bergeron School of Karate”.  We fished from my 2012 ranger 619 Fisherman.I learned a lot about the merits of slowing things down.  Claude’s a firm believer that a spot that has proven itself in the past will always produce; it’s often just a matter of waiting while maintaining a positive mental attitude.  No doubt, Claude’s level seven black belt has honed his ability to stay focused.  His approach bore fruit as we commenced culling by 11: in spite of our going without a serious bite for the first two hours.

The 225hp E-TEC ran twice that day – five minutes leaving the start, and another five getting back.  Otherwise, we spent the day moving around a large weed flat using the Minn Kota Terrova with plenty of occasions holding stationary with the Terrova’s I-Pilot anchor lock feature.  Claude himself uses a Minn Kota Talon to achieve a fixed anchored position necessary to dead-stick soft plastics at the end of long casts.

Claude is a huge proponent of fishing Senkos wacky style unweighted using octopus style hooks.  By noon that’s pretty much exactly what I was throwing too.  Instead of an octopus hook however, I elected instead to use a weedless wacky hook, but on reflection, I don’t think I was that much better off in terms of keeping weeds off my line.

Claude’s method is to make long casts into gaps between the weeds and simply wait.  He’ll give the Senko a few twitches once it’s resting on the bottom, and sometimes let it sit for as long as a minute before quickly reeling in.  We both picked up weeds on the retrieves which meant we only actually fished the spots where our baits initially landed.

Claude’s slow and systematic style of fishing has paid off on many occasions.  He and his partner finish routinely near or at the top.  It also confirms what many of us already suspect but often have difficulty putting into inaction.  It isn’t necessary to be in constant motion to find fish.  Even if the fish aren’t biting now, at some point in the day, they will feed.

Funny enough, when comparing notes at the end of the day with the other anglers, many reported catching most of their fish in the first 2-3 hours – the same time period Claude and I caught nothing.  Conversely, when Claude and I started catching Bass, the bite for many of the other competitors dropped off.

Claude and I may not have won the event that day, but what I learned was invaluable.  Slow down, and catch more fish.

Big thanks to the Renegade organization for allowing me to participate in the event, to the volunteers who assisted with launching boats and hosting the free BBQ, and to Renegade’s 2012 MC Big Jim McLaughlin for making us all feel like winners.  Shimano, Berkley, Paddle tails and Bennett’s also stepped up to the plate in big ways to reward each and every amateur – an over-all experience that’s well worth the investment.