There are risks in any outdoor activity: to yourself, to others in the immediate area, and to your guide dog. You can either live your life in a protective bubble or push out on the walls that define your limits and try new things. This is how I learned to keep doing the things that are important to me as my eyesight deteriorated and eventually faded away altogether, and how I learned to do new activities as someone without sight.

Caren and Andrew from CNIB’s Guide Dog Program came by my house today with two trainee guide dogs, Lewis and Sherman. Our goal for the day was to try sledding on a nearby community hill, and snow shoeing in a local forest. It made for a long day.

The sledding adventure was led by Theo, my 11-year-old son. He knows the hill well. We took a few practice runs without involving dogs, starting at the top and launching ourselves aboard our individual sleds over the mid-hill ramp. We sure managed to get some air! Theo took a tumble, but I was able to stay upright.

The next phase involved starting just below the ramp, and me holding each dog in turn by their long leashes. No harness was involved, and there was to be no guiding expected of the dogs. Now, I never discourage a little bit of pulling action by my dogs when we walk up the hill, but coming down is a totally different matter.

The whole point of having my guide dog follow me up and then later back down the hill is so that when I get to the bottom, my guide dog is nearby, ready to move me to the side of the hill, and back up for another run. It’s also great exercise for everyone involved.

With my own guide dogs I never hold the leash coming down the hill. The dog knows to follow and to stay close. I also never do this without someone with sight advising me when it’s safe to start.

When I mean safe, I mean no one coming from behind that could crash into my dog, and no one in front of me that I could crash into. For this reason, you want to pick hills or times of the day when there aren’t many others using the hill. 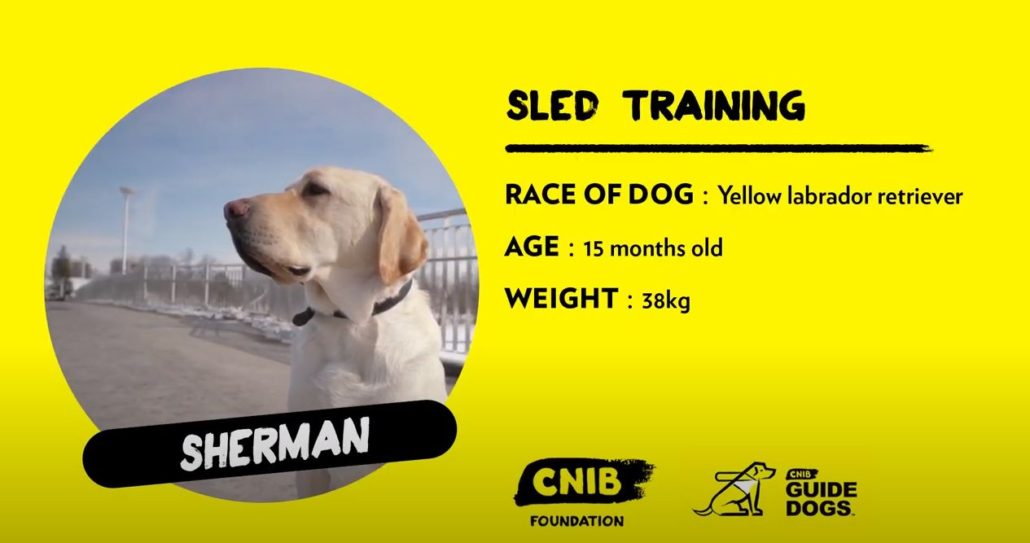 I discovered that Sherman was a natural. Fearless, confident, and in the mood for having some fun. He followed along next to me coming down without ever introducing any tension in the leash. He also stayed well to the side at the end of his full two meters of leash fully extended. At the bottom of the hill, we had some good wrestling each time which we both enjoyed.

Lewis? Well he was a bit more timid. I don’t think he had ever been sledding before. He liked it though, and by our second try he was fully into the spirit of the day.

I didn’t really know either of the two dogs at this point. Even with Karen and Andrew looking on, none of us thought it was time to release these dogs from their leashes. I always did this with my previous dogs, but as I said earlier, I always have someone with me who has sight to make sure the dog never goes far or wonders off into the path of other sledders.

Sleds travel fairly predictable paths down a hill, so it doesn’t take long for dogs to figure out how to anticipate their trajectory. They also love the action and the chase, making it a good form of exercise for all involved.

Lewis also enjoyed the wrestling at the bottom of the hill, in fact, even more-so than Sherman.

Where Sherman seemed more confident, he also seemed a bit less playful than Lewis, who may be the most playful dog I’ve ever met. Funny, two dogs in the guide dog training program, but with two completely different personalities.

Something to keep in mind is that guide dogs are not sled dogs. They aren’t meant to pull loaded sleds. I say this because there are some breeds that just don’t have the strength in their joints to perform this type of work. If a guide dog injures a leg joint and requires surgery, that means they then put all their weight on the opposite leg during the recovery period, which means joints in that leg will quite likely fail as well. It can mean a good year of surgeries and recoveries and in the end, you very well may end up with a guide dog that can no longer work without experiencing pain.

Next up, Canadian snow shoeing, with dogs…