In 1986 I worked with an elderly blind gentleman who operated a small store downtown Toronto. For over 30 years he commuted to work and back each day using the city’s subway system and a white cane. Then one day he stepped off the platform and landed on the tracks. It was then that he decided to get a guide dog. He was one of the first ten people in Ontario to get a guide dog, and it convinced me to be the next.

I myself was experiencing difficulty getting to work at night, and to walk safely inside the large university buildings in the winter as my eyes could not adjust to the changes in light levels. I also wanted to be around to be a father to my first child, Alexandra, who was six months old when I left for the four weeks of training required to get my first guide dog.

At the time I applied, there were no guide dog schools in Canada, so I had to attend a school in the US. I didn’t even own a white cane at that point, even though I had been registered blind at age eight and I was now 23. Thankfully, the school seemed not to care that I had no orientation and mobility training, and understood my situation. 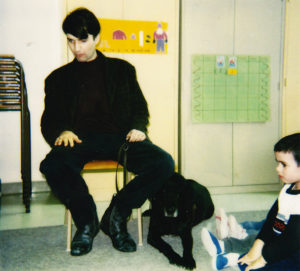 The dog they gave me was a large black Labrador. He came from a highly successful breeder with many champion retrievers to their credit. At that time, MANY guide dog schools received their puppies from kennels that specialized in breeding and training retrievers for competition and hunting. To have one of their breeders qualify as a guide dog was considered a bonus when marketing their dogs to their sighted customers. Wickett was every inch a hunter.

Over our ten years together my family expanded to three children – all of which Wickett would watch closely, and if I wasn’t sure where one of the kids went, I could simply grab his collar and say “find…”, and he would take me directly to the child. It almost became a sort of game.

Wickett attended six years of undergraduate and graduate studies at universities with me, lived with my family and I in Canada’s Arctic for several months and in Sweden for a year, spent his summers in Cape Bretton Nova Scotia where I had purchased a small cabin, and eventually moved with us to Ottawa where I began my career in the government.

What I found to be most amazing about this dog is that he was with me every step of the way as I transitioned from being a person with low vision, to someone who no longer had functional sight. At the beginning, I largely led him around most of the time when light levels were optimum, and only really used his guiding services in low light situations. By the end of our ten years together, he was guiding me full time.

The other thing I found astonishing about Wickett, was his truly dual personality. Like me, he enjoyed being in the outdoors, but like me, he had little choice but to spend every fall and winter going to school, and then later, working pretty much year round.

I would let Wickett run off leach every day in a ravine near my university. IN the summer, when we would relocate to our cabin in Cape Breton, Wickett would spend every day and often the nights too outside from May through to the end of August. I would fish Cod with a couple local fishers during the day, and would not bring Wickett on the boat. He got to know the forest around our cabin so well, he’d often disappear for a complete day. He spent his time hunting, and even perfected the art of catching small baitfish along the shoreline.

To me, having a guide dog that could also express his natural tendencies made perfect sense. In many ways, we were alike in that regard. The contrast became even more evident when I graduated university, moved back to Canada from Sweden, and began working.