While the late and stormy spring may have delayed the start of our open water fishing, it freed up time to do even more to plan, promote and celebrate outdoor traditions. The following are Moby and my 2017 highlights. 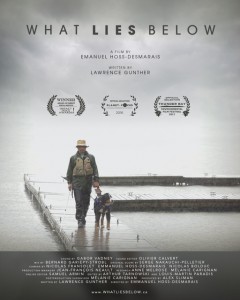 Lawrence’s documentary “What Lies Below” poster

Canada is far from being a land of doom-and-gloom. We have much to take pride in and celebrate. It’s therefore with considerable excitement that I announce the launch of my new video series Lake2Plate.

Videos feature my guide dog Moby and me taking celebrity chefs fishing, and in exchange, learning to prepare shore-side feasts featuring our sustainably harvested fish and some local wild forage. It’s a true celebration of the traditional shore lunch intended to inspire others to reconnect with nature.

Finally came to a head. Over 18 festivals around the world have now featured the 79-minute film. Numerous published reviews and interviews can be found on line. Both CBC and AMI TV have begun broadcasting the film.

Producing content for TV in 2017 includes: Postcards from the Yukon

A 55-minute TV special exploring Canada’s Yukon territories from Whitehorse to Dawson. Along with meeting so many amazing entrepreneurs, I also caught my first-ever Arctic Grayling! 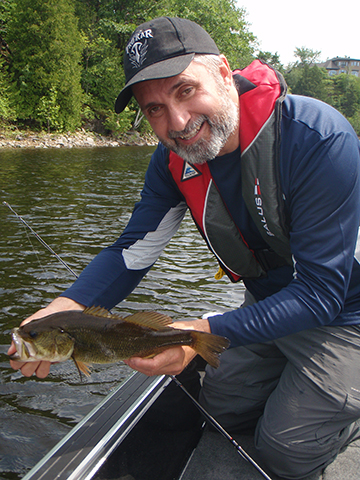 Over 165 episodes have been released, with an average weekly audience of 100,000. Blue Fish isn’t so much about how to catch more or bigger fish, as it is about what people are doing to make sure there are fish around to catch.

Our charity “Blue Fish Canada” makes available the tips for free, along with print and on-line stewardship resources, and shoreline clean-up kits. 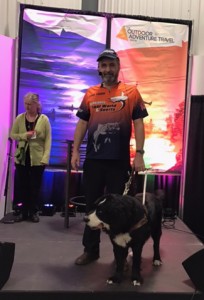 Behind the scenes I’m working closely with numerous research facilities and water activist organizations to promote fish health and recreational fishing. Last May, in partnership with the University of Ottawa and the St. Lawrence River Institute, I organized and chaired a half-day River Symposium including six presentations and over-90 researchers and policy makers in attendance. Ensuring fish have suitable habitat also includes leading discussions on fish health in venues such as the Great Lake Network and the People’s Great Lakes Summit.

In the spirit of carrying forward the tradition of blind people serving as story tellers, I always find time to speak to fish and game clubs, conservation groups and at outdoor shows. Exhibiting at outdoor shows remains a priority, and 2018 will witness a fresh new look to our offerings including a new skill-testing stewardship quiz and prizes.

I think the following quote published in a recent Huffington Post Article sums-up my motivation nicely: “I started Blue Fish Canada to encourage people to find themselves a pond, river, lake or bay where they can catch a fish for dinner once in a while, and to then take responsibility for ensuring nothing bad happens to their fishing hole that could stop their great grandchildren from doing the same.” 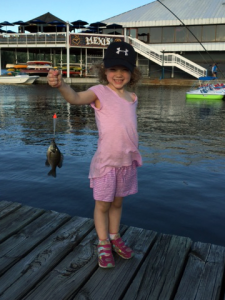 Girl guide with her first fish

After competing in well-over 125 fishing tournaments in the past ten years, I’ve finally managed to take a step back. I still competed in seven Walleye, Bass and Musky competitions this year and earned one big fish and one 1st-place finish. However, getting others interested in fishing is now my focus, such as organizing events such as: Girl Guides Go Fishing

Without the support of my sponsors much of what I do would not be possible. These folks are fully aware and whole-heartedly support my stewardship work. It’s an honour to represent their brands.

Talking computers are just one of many innovations for the blind that allow me to make a living, including penning outdoor articles. Topics this year included:

My writing also extends to dozens of blog entries posted to sites such as LawrenceGunther.com, FeeltheBite.ca and my very first blog site BlindFishingBoat.com

Lawrence and Moby in the Blind Fishing boat

Since first starting to blog about my outdoor pursuits in 2007, my path is one that’s best described as “feeling my way”. Listening to others, yes, but mainly to my own heart. I hope the commitment I put into my work is plane for all to see.