I just fished my first Provincial B.A.S.S. qualifier among 199 other competitors. It was an individual event with boaters and non-boaters rotated daily. The event is hosted each year by a local club selected by the presidents of the 21 clubs that make up the Ontario Bass Nation. This year the event was held on the Bay of Quinte, a body of water located along the north-east shore of Lake Ontario. Even though tournament limits excluded our going out into the lake proper, it still left us the 40 mile long bay to explore – a lot of fishable water.

My day one boater was the current president of the Ontario Bass Nation, Mr. Paul Kroisenbrunner. Paul’s a true gentleman to fish with, even though we were competing against each other aboard the same boat, (the Qualifier uses individual weights). Paul keeps his Stratos impeccable and his 175hp Johnson works perfectly. It was a true pleasure to fish from with its expansive rear deck.

We caught most of our fish up one of the many rivers that empty into the Bay. Paul, being from southern Ontario, is a seasoned Steelhead / Salmon River fisher and understands currents and the best way to present baits. Having grown up myself fishing trout rivers, I too took readily to the challenge. A combination of tubes and drop-shot techniques were the ticket. Paul also spotted some additional fishable waters further up the river that he saved for day two, with good results. Each of our respective bags presented the tournament director and his weigh-in officials with some of the first Smallies of the day. 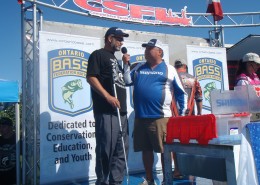 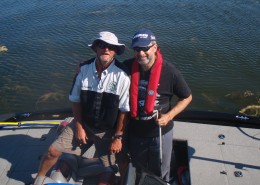 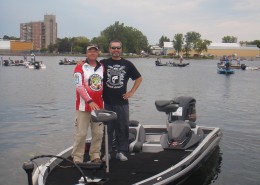 Day two had me aboard Mr. Doug Catton’s brand new Ranger Comanche 520C. The Ranger easily pushed 70 MPH, and proved as nimble as a cat as we passed by quite a number of boats that left ahead of us on day two’s start.

Although our first few strategies failed to produce the numbers we were looking for, our continuously adjusting and trying different styles of water eventually paid off. Seven-inch Senkos seemed to be the ticket in the end, fished along weed edges in 8-10 feet of water.

Weigh-ins was well organized with 100 boats and 200 bags of fish to process. Mr. Reno Viola and Mr. Andrew Pallotta co-hosted the stage. Andrew also provided the staff and equipment to ensure the fish were weighed in without mortality using Shimano’s water weigh-in system.

Final results had our own club president, Mr. Frank Ramsey, taking home top prize with over 33lb of fish caught in two days. Another of our club members, Mr. Charles Sim, qualified in position 11 of the 12-person team that will represent Ontario at the 2014 North-East Regional championships to be held somewhere in the state of new York. Our club, the Ottawa Valley South Bass Masters, finished close to the top.

In addition to the actual event, tournament organizers held a one-day junior tournament the day prior, took over 30 military vets fishing, and hosted a kids fishing derby. Hats off to all the volunteers, sponsors and organizers – job well done.

Five Steps to Selecting the Right Bait
Scroll to top