Continuing through 2013 as a Pro Staff member for both Ranger Boats and Evinrude E-Tech, I recently took delivery of my 2013 fishing boat that I’ll be using to both introduce blind people to the sport of fishing, and to take part in the roughly 25 fishing tournaments I compete in each year. Thanks to the great support from Orleans Boat World, the transition from last year’s Ranger to my new boat was absolutely painless.

In 2012 I had the privilege of owning a Ranger 619 Fisherman rigged with an Evinrude 225 HP E-Tech. I loved that boat as it provided me the best of two worlds. Equipped with a full rear deck extension, the boat served more than adequately as a Bass fishing platform. Remove the deck, and the boat quickly converted into a Walleye / Musky trolling machine. My 2013 620 goes further in several important ways.

The new 620 also came with a rear deck extension, but now even with the extension in place, there is still more than ample room to move about the cockpit, and with the extension removed, there’s plenty of room for four guys to troll for Walleye all day.

Both the 619 and 620 have mammoth front casting decks. The extra nine inches in the 620’s length is made evident in the cockpit. Snap out carpet in the cockpit also reduces maintenance and worry. 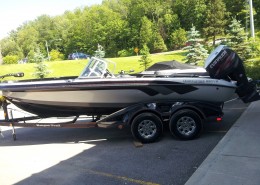 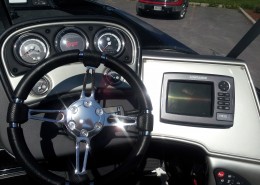 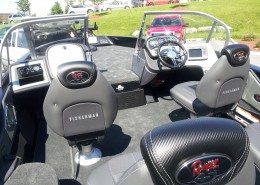 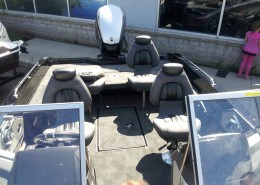 While the rear storage boxes in the 620 aren’t as wide as they are in the 619, the fact that there are four instead of three, more than makes up for their reduced width.

Once again I let Ranger Boats put the colour package together. The 45th anniversary colours were complimented this year by Evinrude with a custom painted motor to match. The black / silver with red pin striping is quite the crowd pleaser.

Lowrance HDS Gen-II fish finders are flush mounted in the bow and driver’s consoles, which is also where one finds the key pad that replaces the key. The three deep-cycle batteries for the Minn Kota Terrova 101 are positioned mid-ship along with the starter battery in a special battery compartment in the floor.

The front deck houses five compartments. A centre rod storage box that easily swallows up 12 of my longest rods, an aerated 5-gallon bait well just ahead of the starboard console, a built in cooler in front of the passenger (port) console, and two quite large and deep compartments – one of which now contains my PDFs, safety gear, paddles, etc., leaving the other wide open for guests.

To aid with launching and trailering, I ordered the retractable keel roller system for the trailer. Once the trailer is in the water, I can simply turn the secondary winch’s handle, raise the three rollers positioned below the keel, and easily slide the 620 off the trailer. The same works in reverse, eliminating the need to power the boat on to the trailer by simply winching the boat all the way up using just one arm to turn the handle. An emergency break on the trailer also removes the need to place bricks behind trailer wheels, and the up-graded “American Racing” rims on all five tires (including spare) are a nice touch.

Finally, a really cool refinement Ranger made to the 620 was the reduced height to the walk-through windshield. Sure, it means slumping down somewhat to get out of the rain when underway, but it also means less of a “sail” for the wind to catch, and less chance of the windshield getting in the way of rods or landing nets. It just also looks a whole lot cooler!